Groundbreaking ‘Native Son’ adaptation gets a SoCal premiere at Antaeus 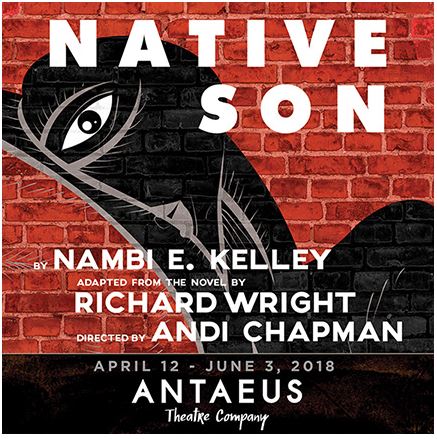 Set in 1930s Chicago, where opportunities for African-American men are elusive, Kelley’s adaptation focuses on the inner workings of the protagonist’s mind as a series of unleashed events violently and irrevocably seal his fate.
Jon Chaffin stars as Bigger Thomas, suffocating in rat-infested poverty on Chicago’s South Side, with Noel Arthur as “The Black Rat” — the manifestation of Bigger’s double consciousness. When a job as the family chauffeur brings him into the white world of wealthy Mrs. Dalton (Gigi Bermingham), her free-thinking daughter, Mary (Ellis Greer) and Mary’s Communist boyfriend, Jan (Matthew Grondin), circumstances spiral out of control. The ensemble also features Mildred Marie Langford, Ned Mochel, Victoria Platt and Brandon Rachal. (Unlike most Antaeus productions, Native Son is single-cast.)

Double consciousness, according to W.E.B. Du Bois, refers to the effects of white racism — to “the sense of always looking at one’s self through the eyes of others, of measuring one’s soul by the tape of a world that looks on in amused contempt and pity.”
“This is the story of a young black man’s life in 1939 America, who from birth is compelled to pass through a tragic gauntlet of oppression,” states Chapman. “The play moves like a runaway train. The tension starts at the top and ratchets up from there.”
“Everything is told from from Bigger’s point of view, through his lens,” explains Kelley. “The adaptation is an exploration of the concept of double consciousness as it relates to the concept of one's ability to fly or be free. Think of it as a mind-map.”

One of the earliest successful attempts to explain the racial divide in America in terms of the social conditions imposed on African Americans by the dominant white society, “Native Son” was an immediate best-seller when it was published by the Book-of-the-Month Club on March 1, 1940. In his 1963 essay “Black Boys and Native Sons,” Irving Howe wrote: “The day Native Son appeared, American culture was changed forever… [it] brought out into the open, as no one ever had before, the hatred, fear, and violence that have crippled and may yet destroy our culture.” The novel’s first stage adaptation, written by Wright and Paul Green, was directed by Orson Welles and ran on Broadway for three years. Kelley’s 2014 adaptation premiered at the Court Theatre in Chicago, where it was nominated for five Jeff Awards including Best Adaptation and Production of the Year and was the highest grossing production in the Court's 60-year history. It was included on the 2015 Kilroy List, an annual collection of highly recommended plays by women and trans-identified authors, and is published by Samuel French.

“The birth of bigger Thomas goes back to my childhood,” Wright wrote. “But there was not just one Bigger, but many of them, more than I could account and more than you suspect… The Bigger Thomases were the only Negroes I know who consistently violated the Jim Crow laws of the South and got away with it, at least for a sweet brief spell. Eventually, the whites who restricted their lives made them, pay a terrible price. They were shot, hanged, maimed, lynched, and generally hounded until they were either dead or their spirits broken.”

Nambi E. Kelley has penned plays for Steppenwolf Theatre Company, Goodman Theatre, Court Theatre/American Blues Theater, Lincoln Center Theater Director's Lab, LATT Children’s Theatre/Unibooks Publishing Company (South Korea), Teatri Sbagliati (Italy), and The Finger Players (Singapore), where she also performed in the co-adapted production of The Book of Living and Dying. Her other works include Xtigone (Chicago Danz Theatre Ensemble; African American Shakespeare Company, directed by Rhodessa Jones) and For Her As A Piano (a Goodman Theatre/Chicago Dramatists/Pegasus co-production). A recent finalist for the Francesca Primus Award and the Kevin Spacey Foundation Award, Kelley was Playwright in Residence at National Black Theatre where her play Blood starring Roscoe Orman received a workshop production in November. Professional affiliations include Goodman Theatre Playwrights Unit, Steppenwolf Theatre Company, La MaMa E.T.C., Spoleto, Ragdale Foundation and playwright emeritus at Chicago Dramatists. An accomplished actress, Kelley has performed at theaters across the country and internationally and has been seen on several television shows, including Person of Interest, Madam Secretary, Elementary and Chicago Justice. Nambi has a BFA from The Theatre School at DePaul University and an MFA in interdisciplinary arts from Goddard College.

Andi Chapman is the associate artistic director of Ebony Repertory Theatre, where she directed The Gospel at Colonus (14 Ovation nominations Including Best Play and Direction; winner of the 2016 NAACP Theatre Award for Best Production). Other directing credits include Mockingbird, As it Is In Heaven, The Ninth Wave, Steel Magnolias (Actors Co-op Theatre Company: Best Director Award), The Dutchman and A Summer Memory, among others. For film, she directed the award winning shorts Memorial Street, Elijah’s Song and Why?. As an actress her television, film and stage credits include: NCIS, SMLF, Shameless, Glee, Dexter, 24, Six Feet Under, Short Cuts, The Lower Depths and Blood Wedding. She is currently the Center Theatre Group program advisor/coaching artist for the August Wilson National Monologue Competition. A professor at various universities, including Pepperdine and Chapman, she currently teaches film acting at Azusa Pacific University. Ms. Chapman is a graduate of Yale School of Drama/M.F.A, an alumna of the American Film Institute’s Directing Workshop for Women, and a selected participant of the prestigious Lincoln Center Directors Lab.

Antaeus is a cooperative theater ensemble founded to empower the actor and to bring classical theater to Southern California. The company exists to create a family of artists and audiences and is dedicated to exploring stories with enduring themes. Taking their company name from the Titan who gained strength by touching the Earth, Antaeus members — many of whom are familiar to film and television audiences — regain their creative strength by returning to the wellspring of their craft: live theater. Members of the company span a wide range of age, ethnicity and experience; they have performed on Broadway, at major regional theaters across the country, in film, television and on local stages, and are the recipients of numerous accolades and awards.

The new Kiki & David Gindler Performing Arts Center complements Glendale’s ongoing commitment to integrate vibrant arts space into the fabric of city life, ensuring the arts remain accessible to all. Located just a few blocks away from The Americana at Brand and the newly remodeled Glendale Central Library as well as the Alex Theatre, the center promises to build upon Glendale’s growing reputation as an arts and entertainment destination. The center includes an 80-seat theater, a reconfigurable 45-seat performance/classroom space, a theater classics library and a lobby art gallery.

Performances of Native Son open on Thursday, April 19 and continue thereafter on Fridays and Saturdays at 8 p.m.; Sundays at 2 p.m., and Mondays at 8 p.m. (dark Monday, April 23 and Monday, May 28) through June 3. There will be one additional Thursday evening performance on May 31 at 8 p.m. Tickets are $30 on Thursdays, Fridays and Mondays, and $34 on Saturdays and Sundays. Six preview performances take place April 12 through April 18. Preview tickets are priced at $15. Antaeus Theatre Company has partnered with TodayTix, the free mobile ticketing platform, to offer a $5 preview lottery; a limited number of $5 tickets will be made available through the TodayTix app for previews.

The Kiki & David Gindler Performing Arts Center is located at 110 East Broadway, Glendale, CA 91205 (between N. Brand Blvd. and Maryland Ave.). The first 90 minutes of parking is free, then $2 per hour, in Glendale Marketplace garage located at 120 S. Maryland Ave (between Broadway and Harvard). The theater is air-conditioned and wheelchair accessible.
For reservations and information, call 818-506-1983 or go to www.antaeus.org.
Tags:
Arts & Culture News
Review: Compañía Nacional de Danza
Review: Orpheus and Eurydice