May 22 By Society 805 Staff Writer in Arts & Culture News 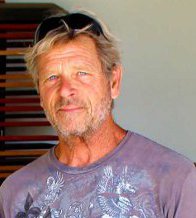 Lindhard’s career as a working sculptor spans more than 40 years and has evolved through woodcarving and bronze casting into a reverence for and fascination with stone, his principal medium for the past 25 years. He creates large and monumental sculptures, many of which that have been showcased in museums and galleries throughout the United States.

The scultpor’s leadership has helped cultivate greater visibility and understanding of the value of the arts in Ventura. Lindhard—who also teaches as a fine arts instructor at Santa Barbara City College—founded Ventura’s Art City Studios almost 30 years ago, a place that has launched the careers of scores of sculptors and new patrons for the arts. Lindhard is also a former board member of the San Buenaventura Artists’ Union and co-founded the annual Fire & Light festival. He was a recipient of a 2007 Ventura Mayor’s Arts Award.

“I never imagined how much Art City Studios would evolve the way it has over the past three decades,” said Lindhard. “I love that this studio offers a platform for local artists to develop their craft and see them create remarkable works of art that is shared throughout the world.”

This is the fourth consecutive year ArtWalk Ventura’s panel of event organizers has appointed an Artist of Distinction Award. The honor recognizes an established individual artist for artistic excellence and efforts in contributing to Ventura’s art community.

“We are pleased to appoint Paul with this year’s honor as Artist of Distinction,” said Kevin Clerici, director of Downtown Ventura Partners. “Lindhard is one of the region’s most prolific artists and an avid supporter of fellow local artists. He has been a driving force of Ventura’s growth as a cultural community.”

For more information about ArtWalk Ventura, visit http://artwalkventura.org, or email ArtWalk Ventura event organizer and owner of Vita Art Center Mary Perez at This email address is being protected from spambots. You need JavaScript enabled to view it..