Review: The Gift of Magi 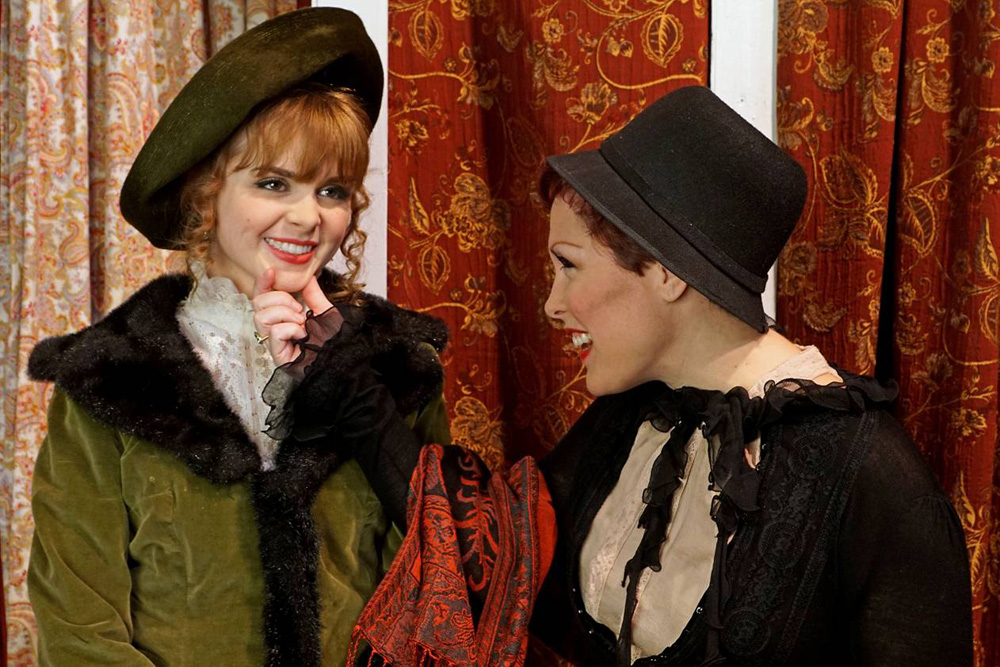 Getting the public to accept a new Christmas play or musical is a difficult task, given that the holiday itself is based on long-standing traditions that are hard to crack. But the creators of The Gift of the Magi, which made its world premiere at the Hillcrest Center for the Arts last night, hope to do just that, and have come a long way since hatching their brainchild a decade ago.

The musical, which is based on a short story published by O. Henry in 1905, is not the first time Magi has been musicalized; an Off-Broadway version made its debut in 1984 while an opera based on the story premiered in 2000. The creators of this version, writer Faith Grant and composer Beverly Bremers, have put together a whimsical production that fills out the story by adding new characters and a dozen songs, many of which are promising enough to become standards in the annual holiday repertoire.

The basic plot involves Della and Jim, a young, but poor, married couple who are desperate to buy the perfect gift for one another. Grant has embellished this by adding several subplots which serve to firmly establish new characters into the storyline. To help achieve this, Grant and Bremers brought in veteran actor/director Barry Pearl, who helped smooth out the sometimes disjointed scenes, and brought them together into a unified whole.

The main plot complication involves Jim's job as an underpaid bank teller. Tempted by the fistfuls of money he handles on a day-to-day basis, he jokes with his good friend William, who works alongside him, about how easy it would be if some of that money simply transferred from the bank's tills to his coat pocket. When a significant amount of money is discovered missing, Jim is accused of committing the crime by Mr. Porter, the miserly bank president (O. Henry's real name was William Sydney Porter). If this plot line sounds familiar, you're right - Charles Dickens' A Christmas Carol also tells of an underpaid bank teller (Bob Cratchit) and a miserly boss (Ebenezer Scrooge), while in It's a Wonderful Life, greedy slumlord Mr. Potter accuses innocent George Bailey of running off with money from his building and loan company, when in both stories, Porter/Potter have actually framed Jim/George with taking the funds.

In another side plot, Della's wisecracking spinster friend Maddy is alone again on Christmas, but is looking for someone with whom she can share the holiday. The best addition to the story is the family of Jim's best friend William, a harried husband whose spendthrift wife and two rambunctious children are the cause of much of the show's lighter moments.

There are a few minor problems with the story, which can all be easily fixed, such as Jim being arrested for robbery (which should be burglary, if you want to be technically accurate) based on nothing but circumstantial evidence, and the undeveloped plot line of Della being targeted by unscrupulous lech Mr. Hunnicut (John Content) for some after-hours hanky-panky.

The songs written by Bremers for the show are pleasingly melodious, but several stand out above the others: Maddy's torch song, "Dinner For One," which has the promise of becoming a holiday classic, "King of the Isle," a vaudeville fantasy, sung by William along with a trio of hula dancers, and "Why?" a deliciously whimsical song written for the children of William and his wife Betsy.

Grant and Bremers were blessed with having the glorious Natalie MacDonald on hand to play Della. With her wide Disney eyes and kewpie doll voice, MacDonald is the perfect heroine for the story. Similarly, Kristian Rasmussen exhibits a sweetness that makes Della and Jim's love for another believable and touching. Farley Cadena has made a career of playing quirky character roles, and she gives Maddy an extra dimension of likability and sympathy that might not normally be evident. We wish more had been done with her character.

As William, Alex Camp is excellent in a comical character type that director Pearl himself has perfected over the years. Branda Lock is also outstanding and funny as Betsy, but the real scene-stealers of the show are Kai Nuki and Scarlet Spencer as the children, Nestor and Annabelle, who hit every mark, sing on pitch, and provide well-timed laughs with all of their lines.

Wayne Moore provided the excellent music direction and arrangements, while special note should be given for Rei Yamamoto's outstanding and attractive scenic design.

As a work-in-progress, The Gift of the Magi is a delightful stocking-stuffer that has much appeal and heart going for it. Family-friendly, tuneful, and funny, it is a welcome addition to the seasonal theatrical repertoire.

The Gift of the Magi plays through December 21 at the Hillcrest Center for the Arts. For tickets, visit www.hillcrestarts.com.

VC On Stage is an online dynamic community for theater lovers, which brings over sixty Ventura County theater arts venues together in one common platform. Elements include: - Feature Stories - Interviews & Profiles - Performer Bios - Our Comprehensive Calendar Of Events (The largest of any Ventura County Publication), including location, dates, and show times for ALL Ventura County Plays and Musicals. Cary Ginell has been reviewing Ventura County plays and musicals since 1996. In addition to serving as publisher for VC On Stage, he is the editor of "Broadway Musicals: Show By Show," published by Applause Books. As a flutist, he has played in various pit orchestras for Ventura County musicals.

More posts from author
Review: The Gift of Magi