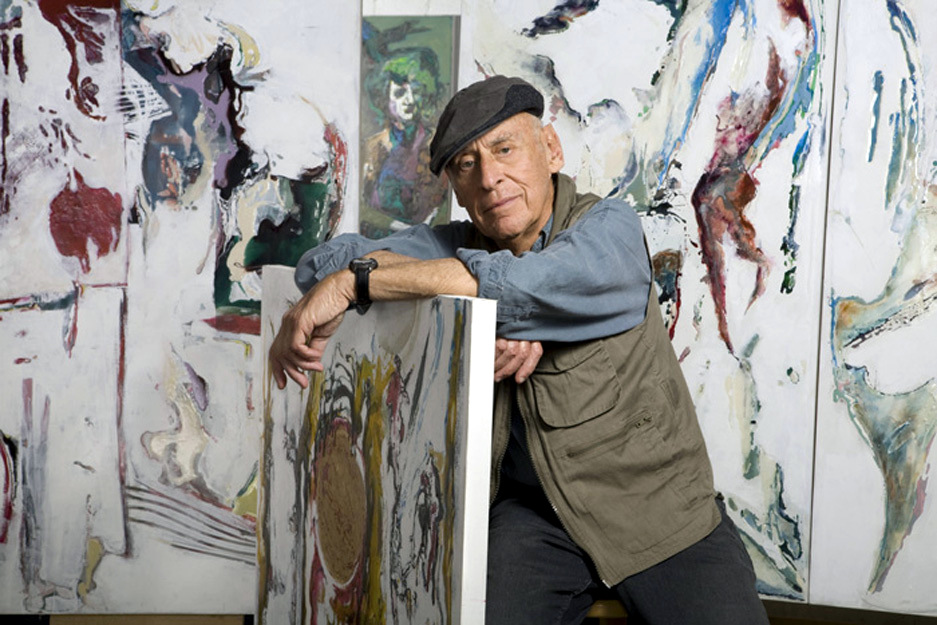 Leonard Poteshman (1925-2014)
It is with great sadness that we announces the passing of Len Poteshman, a painter, sculptor, educator and Art Crimes Consultant. He died of brain cancer and was under hospice care for only a few days. Len was 88.
Len's early dreams of being a concert violinist came to an end due to injuries sustained while serving in the military during World War II. He then pursued an arts education at the Chicago Art Institute, the American Academy of the Arts, Chouinard, and the University of Guadalajara where he received his Masters of Fine Arts degree.
Not following a predictable path, Len began a career in law enforcement where he worked undercover specializing in art crimes; he detected forgeries, created composite drawings of suspects and co-authored a book, Museum, Archives, and Library Security. He supervised the art crimes departments for the FBI, INTERPOL and the Los Angeles County Sheriff's and Police Departments. Powerful examples of his abilities as a sculptor include a work he created for the City of Montebello that is made of confiscated weapons and a sculpture of a law enforcement officer installed at the headquarters of the International Association of Chief of Police, Inc. in Gaithersburg, Md.
Retirement finally gave Len the time to fully explore his creativity. He considers himself "a non-conceptual artist" whose "process of creating provides him with the possibility of bridging illusion and reality." His work brims with energy and explosions of color and often expresses wry comments on modern life.
Len was fascinated by Koi fish. In 1971 he built a Koi pond and began raising ornamental carp. Later he would capture their brilliant colors and sinuous nature on canvas, many in three-dimensional form. Len was open to new and unconventional materials, experimenting with a variety of artistic expression, commenting "Portraits are nothing to me now when I have the opportunity to work with so many other mediums." Examples include works that incorporate plastic fruit, epoxy and masks. Bold colors conveyed both raw emotion and beauty. However, Len was equally comfortable with a softer palate and a refined delicacy of expression.
Len's work has been exhibited widely throughout California including the Los Angeles County Museum of Art, the Riverside Museum and locally at the Bell Arts Factory. In addition, his work has been exhibited in Spain, Mexico and Washington. He was a member of the Buenaventura Artist's Union and an original tenant of the Bell Arts Factory. Len was extensively documented in 2011 by Focus on the Masters. He was an energetic participant in fund raising efforts conducted by Focus on the Masters, the Ventura Music Festival, and Food Share, among others.
Len Poteshman is survived by his wife retired psychotherapist and ceramist Linda Carson and two daughters, Neila Poteshman and Mica Poteshman, four grandchildren, and three great-grandchildren. There will be an art-filled memorial service to be announced.
The family has requested that, for those who feel inclined, they can send donations in honor of Len to Focus on the Masters, 505 Poli St., Suite 405, Ventura, CA 93001.
Tags:
Arts & Culture News
Review: The Diary of Anne Frank
Review: A Glimpse at Godspell