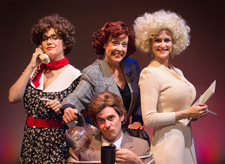 9 to 5 Returns to the Live Stage
Review
Country music superstar Dolly Parton reached a new level of success after starring in the 1980 hit comedy film 9 to 5. Several decades later, Parton decided to transform the popular story into a musical, but when the show made its Broadway debut in April 2009, it received mixed reviews. Despite being nominated for several different awards, including four Tonys, 9 to 5 had a fleeting run on the live stage, closing just five months after opening night. The public barely had enough time to acknowledge its existence, and yet, community theatres have continued to put on their own productions of 9 to 5, which has prevented the quirky, dated musical from becoming completely forgotten.

On Saturday, September 20, the Simi Valley Cultural Arts Center's own version of 9 to 5 opened, and the audience showed nothing but enthusiasm and support for the entire company. Under the direction of Fred Helsel, SVCAC's 9 to 5 has its own special charm. The characters display just the right amount of spunk, and the three female leads showcase a genuine connection on stage. For those familiar with the film, it's hard not to compare the actresses on stage to the ones who dominated the silver screen. Notable differences are changes to the plot and character development, however, the stage version still proves to be just as entertaining and hilarious.

Aileen-Marie Scott plays Violet, the ambitious widowed mother, displaying undeniable confidence and a prominent take-charge attitude on stage. It's clear that Scott has had plenty of experience, and her unwavering presence reflects the strong, independent nature of Violet's character as well. In songs like "Around Here" and "One of the Boys," Scott also has the chance to show off her vocal abilities. Michele McRae plays Judy, the awkward, inexperienced new girl in the workplace who was dumped by her husband and forced to start life over from scratch. Unlike the tough assertiveness Scott brings forth as Violet, McRae purposefully exudes low self-esteem and timidity in order to capture Judy's personality. She shows significant transformation in Act II, as powerful songs like "Get Out and Stay Out" reveal important aspects of her character.

When 9 to 5 was first staged, Dolly Parton herself played Doralee. The character was written to resemble Parton in looks and personality, and even her backstory was loosely based on Parton's own life. For any actress chosen to play a part so particular, they're bound to face a challenge. It's important to remember that portraying an invented character is far different from playing the actor who embodied that character. Although it was obvious to the audience that Doralee was supposed to resemble Parton, Kate Metroka manages to give the part her own flair. Her southern accent is cute, and aspects of her performance ("Backwoods Barbie") easily brings a smile. Thanks to Parton's talented songwriting abilities, the entire score of 9 to 5 continues to be memorable.

Other standouts in the production include the outrageous Nicholas Ferguson as the sexist, misogynistic CEO Franklin Hart, who received some of the most laughs on opening night, especially during his Act I solo, "Doralee." Yilin Wentlandt plays the sneaky, lovesick employee Roz, who proves to be quite hilarious as well, as her character takes a surprising turn during the song "Heart to Hart." Tyler Vess plays Joe, Violet's coworker/love interest, a character that was portrayed differently in the film.

Becky Castell's creative choreography is successfully showcased on a stage with limited space, and the entire ensemble works hard to move the sets around in between scenes. At times, this presented a few difficulties on opening night, but the cast managed to pull through and continue on with the show. Musical director Gary Poirot leads the full band and their explosive sound matches the liveliness of the show.

9 to 5 is a story about the unfair treatment of women in the workplace. It sends a message of standing up for what is right and encourages others to reach for their own ambitions without a cloud of doubt. Despite all the mixed reviews it received on Broadway from critics, the SVCAC production succeeds in giving audiences a good time. 9 to 5 continues through October 26th. For ticket information, visit www.simi-arts.org.