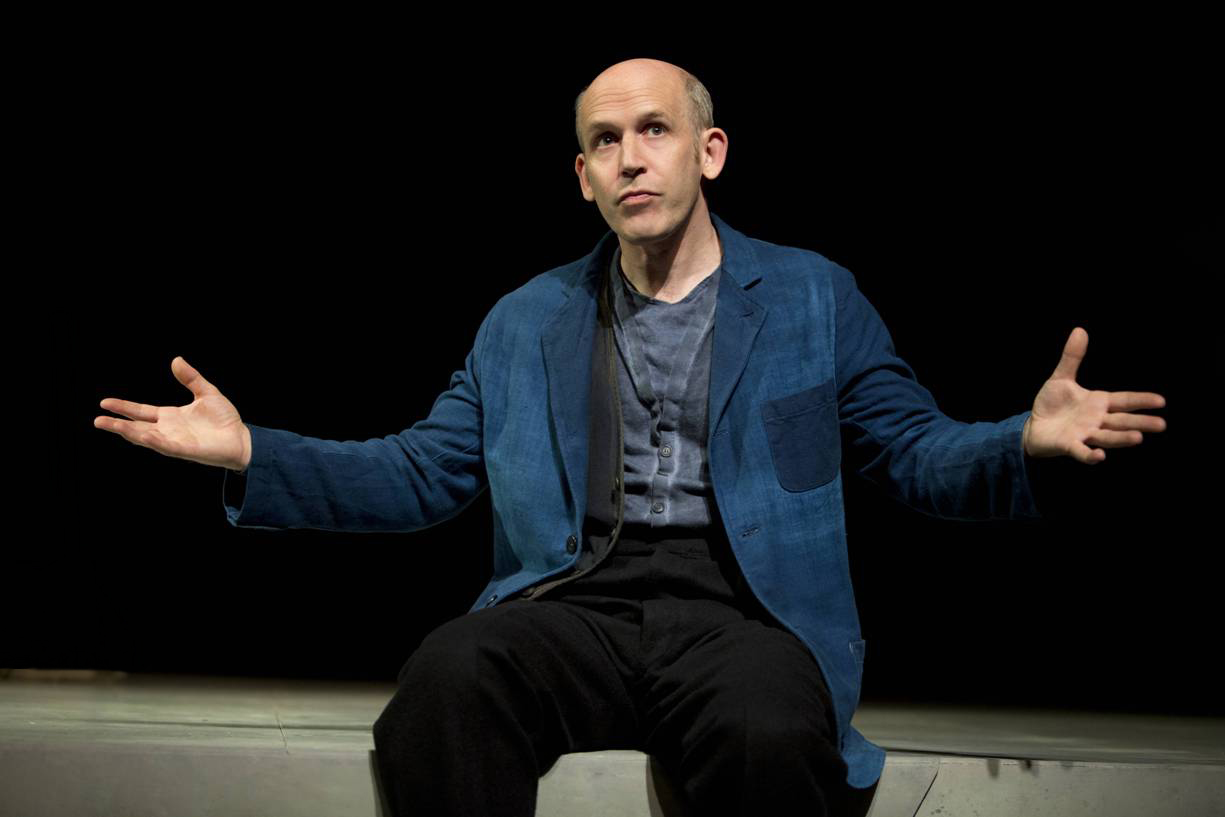 Review
"What was THAT all about?" Those were the words that went through my head upon leaving the Rubicon Theatre Company, after witnessing esteemed Irish actor Conor Lovett's performance of Will Eno's one-man play, Title and Deed last night. I wasn't totally shocked and confused by what I had just seen. I had done my homework on this show, as I do with all shows I see, and discovered that Eno is a Brooklyn-based playwright who is more popular in Europe than he is in the U.S. and has created a variety of controversial plays.
He has been described as the inventor of "standup existentialism" and is the darling of many theater critics.
Not this one.
Title and Deed is completing a limited run of five performances at the Rubicon this weekend, the West Coast premiere of the show. The show consists of the musings of an immigrant to "here," which I discovered is neither here nor there. I guess that's what existentialism is all about. Lovett's first words upon sauntering onto the empty stage and putting down his knapsack containing a long stick and a metal lunchpail were, "I'm not from here. I guess I never will be." In the play, Lovett's unnamed character explains the world he comes from (but not really), his journey to get here (well, not quite), and his encounters (um - sort of). He is searching for a connection to a world where people are unable to claim that they are from "here."
We learn very little about him, except that the "place" he comes from "exports sarcasm and uric acid." We wait for him to get to the point, but he never does. He stares, he stammers, his eyes dart about the room, and he says disjointed things like "Love is a many splintered thing" or "The eyes are the window of the eyes." It's almost as if Lovett was an alien, deposited here from some planet on the other side of the galaxy, taught the English language, and given a bowlful of words from which sentences were randomly assembled, based on parts of speech that made sense together. It was as if a motivational speaker had short-circuited.
Lovett talks rationally, but what he is saying has no meaning, except for occasionally "deep" homilies like "Loneliness arrived sometime after the larynx" and "The world is divided into home and away." He breaks the fourth wall and talks directly to us, assuming we are on the same cerebral plane as he is.
The audience was small but prepared to laugh at each and every word that Lovett uttered (or muttered) on stage, and I was a little taken aback at what they found funny. "Why don't I get it?" I asked myself. "Am I that much of a square?" Part of me wondered if everyone else in the theater was as confused as I was, but just didn't want anyone else to know it. I half expected them to snap their fingers instead of applaud, which was how patrons at coffee houses during the beatnik years of the 1950s showed their approval.
In a talkback session with Eno, who wrote Title and Deed specifically for Lovett, even he couldn't really explain what the play was about - except that it concerned Lovett's character being from somewhere else and not being able to relate to where he is now. Lovett, a slightly built, balding, but congenial man with a sublimated charisma, likened the play to something musical, as if he were playing a score. Title and Deed is directed by Lovett's wife, Judy Hegarty-Lovett, who allowed Conor to go with his improvisational skills to jam on the word-music of the play.
I went to the reviews again. "Humane, literate, and slyly hilarious," said the New York Times. "Madly interesting," intoned Variety. "A Samuel Beckett for the Jon Stewart generation"? Not being a fan of Beckett's post-modern, tragicomic works, I guess I shouldn't have been surprised at the emptiness I felt after seeing Title and Deed, but maybe that was the point all along. Maybe some day, someone will explain it to me.
Photo Credit: Joan Marcus
Tags:
Cary Ginell VC on Stage Rubicon Theatre Company
OJAI PLAYWRIGHTS CONFERENCE ANNOUNCES ITS “BREAKI...
VAM: Improvisational Painting in Ventura exhibitio...

Review: A Glimpse at Godspell

Review: The Diary of Anne Frank