Artist Alejandro Diaz’s Exhibits A Can for all Seasons II

At the Museum of Contemporary Art’s booth at Santa Barbara’s “Taste of Milpas” during Hispanic Heritage Month, visitors left with dirt on their hands and cans full of soil. Balloons marked Thai to Mexican restaurants and booths from wineries to art installations up and down Milpas street. Under the Museum’s tent, artist Alejandro Diaz exhibited a hands-on workshop called A Can for All Seasons II.

The artist’s booth provided participants flowers, seeds and soil to plant in recycled, Mexican brand-name cans. The workshop was inspired by four supersized sculptures San Antonio native Diaz created in 2005: A Can for All Seasons I. Publically displayed in New York City by the Public Art Forum, the sculptures mimicked indigenous Mexican canned foods of corn, chiles, chocolate and tomatoes.

Influenced by South Texas and Mexico’s dense culture, Diaz uses everyday materials and diverse themes in his art pieces. His artworks’ topics range from entertainment to activism, public intervention to appreciation of a specific color. A Can for All Seasons I and II focus on the tale of “making do”: to change from one form to another. The workshop created something aesthetically pleasing out of a usually discarded object. 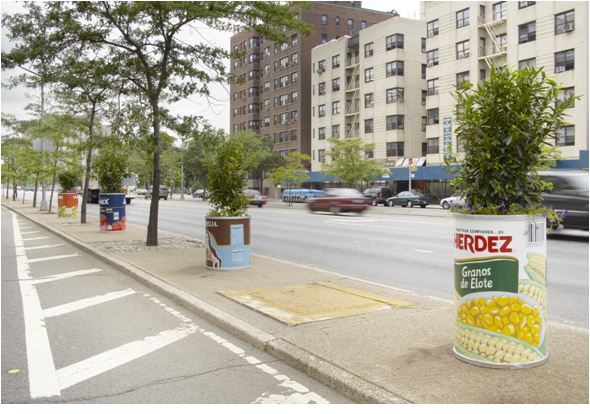 With every art project, Diaz tells a story. In the late 1990’s on Manhattan’s streets, Diaz sold cardboard signs with “Mexican Wallpaper” written with a black marker. In 2012 at the David Shelton Gallery in Houston, Texas, he filled a wall with various cardboard signs; two read “Make Tacos, Not WAR” and “Happiness is expensive.”

Like all his other works, Diaz’s A Can for All Seasons II told a story. His workshop narrated the location: Santa Barbara’s Milpas Street. The booth highlighted the community’s goal to revive the Eastside’s reputation.

At the Association’s event, participants who purchased $25-$30 wristbands sampled 20 plus restaurants on Milpas, a street associated with gang violence and crowded with Mexican cuisine. An extra $15 allowed wine tasting at two booths. The event introduced Eastside strangers and skeptics to Milpas as an (or the) “eat street” of Santa Barbara.

Placed during National Hispanic Heritage Month, “Taste of Milpas” appeared another strategical way to strengthen the low-income, majority Latino community and improve the neighborhood’s reputation. For the past few years, the Milpas Community Association has tried to improve the neighborhood from repainting the Rainbow metal sculpture by the Cabrillo Ballfield to creating a Facebook account for the Eastside community.

The community recently entered the national competition Neighborhood of the Year and won 2nd place for social revitalization and neighborliness. Still, setbacks occur. Last year, locals complained about homeless people urinating in public, and a gang-related stabbing occurred last May. As a result, some Santa Barbara residents continue to criticize the Milpas area.

Locals questioned “Taste of Milpas” and the neighborhood on John Dickson’s food news blog’s description of the event. Anonymous writer Amanda started the thread with doubt. “I avoid this area,” she wrote. “It’s nothing but trouble.” Writer Christine asked: “Will there be security shooing the homeless away? Wine tasting tickets—to taste wine where? Out of a brown bag behind Habit?”

Despite these initial comments, others commended the event. Commenter Andi applauded the neighborhood “that strives for a positive light for our city no matter where the area.” Sharon Byrne, Milpas Community Association’s executive director and Santa Barbara View journalist, tried to clear up the community’s name by adding that the street has worked hard to “revitalize.” “Please give us a chance to show you Milpas in a new light,” she wrote.

Diaz’s A Can for All Seasons II casted the Eastside neighborhood in a different light. At his booth, a recycled object turned into an artistic piece. At the Milpas event, the street “making do” turned into a neighborhood trying to change. Diaz’s workshop demonstrated the possibility of transformation, and that a can is not just a can.