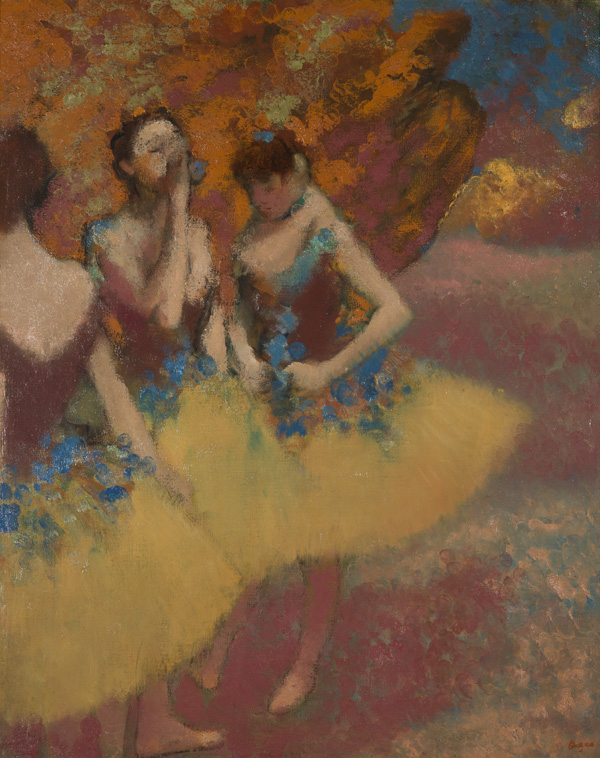 While many exhibitions usually represent a certain artistic school, a specific era, or a single artist, Degas to Chagall transcends categories, showing comparisons between artists and artistic movements not usually exhibited together.

While many exhibitions usually represent a certain artistic school, a specific era, or a single artist, Degas to Chagall transcends categories, showing comparisons between artists and artistic movements not usually exhibited together.

Often considered a great Impressionist masterpiece, Three Dancers in Yellow Skirts (1891) by Degas paradoxically illustrates both a perfection driven art form and the reality of a monotonous and physically draining daily life. The three figures stand in casual poses: one dancer is cut off from the edge of the canvas, another tilts her head back as she drinks some water, while the dancer in the center gazes downward, hand on her hip in contrapossto. The painting looks like a Polaroid, as though we have stumbled upon dancers not expecting to be seen. Despite the relaxed portrayal, one dancer still stands in first position, signifying Degas’ meticulous study of his subjects, comparable to da Vinci’s anatomical drawings. Deepening the irony, Degas illustrates ballet, a subject rooted in fantasy, in a realistic manner. Dancers, usually seen on stage, are revealed for us off stage.

Another work in the exhibition, Chagall’s Blue Angel (1945), does not immediately provoke comparison with Three Dancers. Chagall, often thought of as a Modernist painter, is usually not compared to Impressionist Degas. Dreamlike motifs of floating fish and birds combined with the vivid blue color dominating the canvas look more based on memory than reality.

This contrasts with Degas’ careful studies of live models. One artist portrays the ordinary side of his subject and the other artist the extraordinary.

Aside from attesting to Degas’ observation and study-based technique, Three Dancers reflects Degas’ photographic influence, notably the immediacy of movement captured by camera. Blue Angel is also a painting with movement. Half of the angel’s body is not shown on the canvas, as if she is gliding into the frame of the painting, similar to how Degas cuts off one of his figures in Three Dancers. The floral arrangement on the left side of Blue Angel anchors the angel and the little animals floating throughout the canvas, again adding movement to Chagall’s figures. The angel in Chagall’s painting, although centralized, does not look at the viewer, similar to the downward gaze depicted in Degas’ work.

As Degas didn’t like his work to be characterized as solely Impressionist, Chagall did not like to be called Modernist. Neither work fits into their respective artistic canons. Degas rejected the Impressionist plein air technique favored by Monet and Renoir and was not especially concerned with natural light, since he completed most of his paintings in workshop. Chagall cannot be considered a Surrealist or Modernist painter alone. His paintings do not emphasize perspective and include elements from other styles, such as Cubism. Neither artist belongedto a single movement, something the SBMA exhibition respects.

Degas to Chagll: Important Loans from the Armand Hammer Foundation and the Collection of Michael Armand Hammer is ongoing at the Santa Barbara Museum of Art which is open Tuesday through Sunday, 11 am to 5 pm. For more information on the exhibition or the museum visit www.sbmuseart.org or visit the museum at 1130 State Street.