Review: My Fair Lady at Rubicon 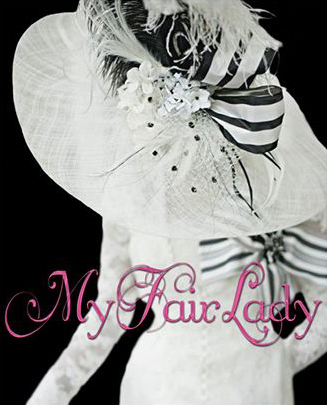 -Review-
The Musical, My Fair Lady is based on George Bernard Shaw’s highly successful play, Pygmalion. T. S. Elliot is rumored to have remarked upon seeing My Fair Lady that “Bernard Shaw is quite helped by the addition of music, isn’t he?” Rubicon’s current production proves the point.
George Bernard Shaw wrote some superb theatre; but he has not fared so well in the late twentieth century and the twenty-first: in spite of being quite funny, he is rarely produced for a variety of reasons, not the least of which is that most of his best work requires careful tweaking to be relevant, or in many cases comprehensible to twentieth-first-century audiences. My Fair Lady, on the other hand, has continued to do quite well during that time. Not only is the film version still heavily watched, but the stage versions have periodically secured long-running revivals.
Of all the Musicals in the classic Twentieth-century canon, many of which have had the blessings of very good film adaptations, My Fair Lady probably plays better than any of them on a non-Broadway stage. If you have never seen such a stage production, you deserve to. Ironically, this is in part due to its structural origin in Shaw’s extremely successful stage play, an aspect that the Rubicon production brings back into focus by emphasizing the acting, and in particular, the ensemble work and psychology of Professor Higgins and Colonel Pickering at its core.
With world premiers, plays by lessor-known or local playwrights, experimental productions, taking on a full-scale August Wilson play, and a commitment to contemporary theatre, one may ask what’s the risk and excitement in Rubicon Theatre doing one of the central works of the modern Musical canon? In a theatre the scale of Rubicon’s? Plenty.
Rubicon has done this before, re-scaling a giant musical to their space. Several years ago they did a version of Man of La Manchia that had people talking for the rest of the year. In many ways, Rubicon founder and Director James O’Neil’s adaptation of My Fair Lady is an even more ambitious and successful rendering.
To be fair, comparing Man of La Manchia with My Fair Lady is a bit of an apples to oranges comparison, for the fact remains: My Fair Lady is a uniquely devilishly difficult play/musical to produce/adapt, and in an intimate space such as the Rubicon’s, many would say impossible. Yet, Rubicon knocks it out of the park.
This thus extends a considerable run of top-notch productions for the Rubicon, where a must-see hit seems to be the new norm.
O’Neil says he wants to give us a play with music, and there is a two-piano chamber version he uses for the base of his adaptation. But the Rubicon stage is so full of talent and people, it begins to take on the feel of a full-blown Musical.
Giamario’s unique sense of getting just the right amount of detail while keeping things simple is a godsend to this production. Otherwise, the scene changes alone required by My Fair Lady would present overwhelming demands on the Rubicon’s resources and scale. Giamario’s set works visually and emotionally, plus allows for fast set-changes that keep the pace rolling [it’s a fairly long play, 16 scenes in two acts, running for 2 and ¾ hours]. It’s a brilliant staging solution assisted by Mary Froehlich’s wonderful costumes, to the extent that the costume design in a sense becomes part of the set changes [which is somewhat true of the film version as well; everyone remembers how the costume color scheme  sets the scene for the Ascot races].
Rubicon reaches deep into the local talent pool and comes up with some delightful surprises. We see a supposedly retired Howard Leader stomping around in the chorus, a local high-schooler, Jesse Graham, hoofing it and singing along with the pros as if he’s been there for years, and we are introduced to strong work and beautiful new voices such as Jahmaul Bakare, Jacqueline Alysez, Lila Bassior, and Amber Petty. Well-seasoned newcomers Michael Stone Forrest and Christopher Carothers round out a strong Cockney Quartet, and formidable Broadway veteran Linda Kerns returns to the Rubicon stage.
The singing and cast is thus excellent throughout, in fact, unusually deep for a regional production, with Kimberly Hessler’s [Eliza Doolittle] voice soaring over all.
There are gems of work buried deep into the second and third tiers of the ensemble. Susan Denaker gives us an endearing Mrs. Higgins, giving her son, Professor Higgins, all his due in the famous garden scene. Will Sevedge sings a fine Freddy Eynsford-Hill, Eliza’s love-struck suitor. Above all, they found Patrick De Santis to deliver an excellent Alfred Doolittle, Eliza’s much-loved outspoken father.
In the end, all productions of My Fair Lady live or die on the part of Professor Higgins, made famous both on stage and in film by Rex Harrison. No one is Rex Harrison. The trick is to take on the roll and own it, learning from Harrison, but not trying to be Harrison.
Joseph Fuqua does this: he gives us a superb, deliciously exasperating Professor Higgins with an especially natural feel. This is great work by Fuqua, perhaps some of his best to date. For fans of Fuqua, this production is worth seeing, if for no other reason. But there are, wonderfully, plenty of other good reasons.

Fugua and Hessler in My Fair Lady at Ventura's Rubicon Theatre. Fuqua triumphs: science at its snearing best. Photo courtesy the Rubicon Theatre and Jeanne Tan.
O’Neil’s more intimate stage version brings the curmudgeonly give-and-take between Professor Higgins and Colonel Pickering back into center focus. Paired with Fuqua is Rudolph Willrich’s Pickering. Willrich is a long-time favorite around the 805, particularly in Santa Barbara, where he has done notable work with the Ensemble Theatre Company and others. Watching Willrich and Fuqua do Pickering and Higgins together is a delight. Willrich also gets to display the great timing he is noted for in a couple of hilarious telephone sequences.
My Fair Lady is singularly dependent on rendering the dialects involved. Probably no other stage play pushes the dialect coach into such central importance. The play is on one level about dialect. This production does an excellent job with this aspect and so special kudos need to go to Rod Menzies, the dialect coach.
Another thing about the dialects: It is remarkable that when Shaw wrote Pygmalion and even by the time My Fair Lady was adapted from it, the deeper importance of dialect to class prejudice [and possibly its role in racial prejudice], was little more than a notion, a rather radical hypothesis promulgated by a fairly small group of intellectuals in a few pockets in the English-speaking world, most notably the Bloomsbury circles and socialists known to George Bernard Shaw, and a small circle of intellectuals in the Northeastern United States.
At the time there was actually very little known about the issue. The phonetics and the linguistic techniques and ability to place people by their accents demonstrated by Professor Higgins did exist, and were somewhat famously demonstrated by several linguists of the time. However, up until Shaw’s play, they were treated as little better than a parlor trick or circus act.
Many people through the ages have wondered how speaking interacts with our prejudices and with class--who has not found themselves thinking less of someone because of their “odd” dialect?; but in reality, surprisingly little had been done on the central hypothesis of Shaw’s play. In fact, it was Shaw’s intent to spur further research and scientific interest on this very subject that in part led him to write Pygmalion in the first place.
One of the extraordinary things about these plays, and perhaps one reason My Fair Lady endures, is that the deep connection between prejudice and dialect, and it turns out not only in class, but race prejudice as well, and how pervasive it is through all aspects of social interactions has been firmly established and its understanding greatly deepened only decades after both were written.
Much of the early research was not conducted until after World War II-- was written in 1912--and extremely important research on prestige dialects in English and their ramifications was not done until the nineteen-sixties in places like the University of Pennsylvania, a far cry from Bloomsbury-era London. Even so, much of this research has yet to penetrate into the awareness of the general public.
It turns out that George Bernard Shaw and Professor Higgins were right--more so than they could ever have imagined. Dialect determines far more than most people ever suspect, and has huge impacts not only on class prejudice, but also race-based prejudicial behaviors and social interactions as well. As one University of Pennsylvania linguist once put it: “When one looks carefully into the dynamics of how prestige dialects work, and how pervasive they are in their social and psychological ramifications, it is hard not to call most human prejudice linguistic prejudice.”
Something to think about when we hear someone speak with a dialect differing from our own in this increasingly globalized world where English is quickly becoming the de facto lingua franca; or as we gaze upon a world full of genocidal civil wars with combatants exhibiting little or no visually distinguishing characteristics other than a surname or manner of speaking.
In the end, My Fair Lady argues for something as important today as it ever was a century ago: that is, sanity in such an insane world, and for everyone to do as Colonel Pickering did when Eliza points out that Pickering always treating her as “my fair Lady” deserving of respect and a good dose of human dignity, even back when she was only a poor, struggling Mayfair flower girl.
____________________________
Rubicon Box Office for single and group tickets: 805.667.2900 www.rubicontheatre.org
My Fair Lady, a chamber adaptation by James O’Neil of Lerner and Loewe’s My Fair Lady musical
at the Rubicon Theatre
Located in Ventura’s downtown cultural district
1006 East Main Street, Ventura, CA 93001
Opening Saturday 24 October and running through Sunday 15 November 2015.
3 Winter Recipes & Wine Pairings To 'WOW' Any Crow...
Eggs; My Go-To Protein!

I'm not quite certain how a review is supposed to be taken seriously when it is so filled with typos and mistakes - Mr. O'Neill did not "adapt" anything - I think you mean his "production" - he cannot change the script even by one word or he would not be allowed to do the play. It's "fared so well" not "faired" and on and on, you even misspell Mr. O'Neill's last name. Does no one proof anything anymore. And really, one line devoted to the actress who plays Eliza Dolittle?

0 Cancel Reply
I'm not quite certain how a review is supposed to be taken seriously when it is so filled with typos and mistakes - Mr. O'Neill did not "adapt" anything - I think you mean his "production" - he cannot change the script even by one word or he would not be allowed to do the play. It's "fared so well" not "faired" and on and on, you even misspell Mr. O'Neill's last name. Does no one proof anything anymore. And really, one line devoted to the actress who plays Eliza Dolittle?
Cancel Update Comment

Thank you Brad for catching the typos, we will correct it. We love it when our readers let us know about typos. Again thank you.

0 Cancel Reply
Thank you Brad for catching the typos, we will correct it. We love it when our readers let us know about typos. Again thank you.
Cancel Update Comment