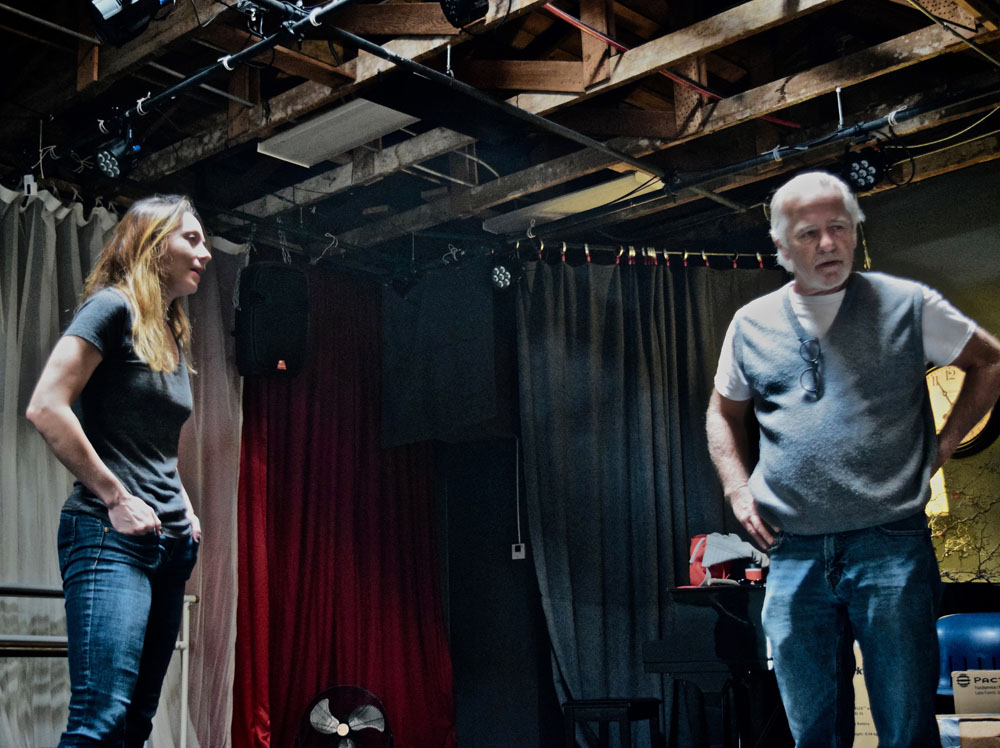 Cornering a predator, Jessi May Stevenson and Taylor Kasch in rehearsal for David Harrower's sensational drama,
Blackbird at Namba in Ventura. Photo Credit: Sarah Thomas
The play is a small scale, barely 90-minute drama featuring a woman, Una, who finds and visits a man she knew decades earlier, but has not seen since she was 12 years old.
Set in a bland, trashy, office breakroom, at first everything seems almost banal, bumbling, oddly normal. We are not clear what Una’s intentions are. Why is she here? What is going on between these two?
Harrower’s deft and dispassionate script sympathetically lures us into the world of these two beings, carefully dissecting their past, revealing their secrets, layer by layer. We are fascinated, pulled in. Like drivers coming upon the scene of a ghastly highway accident, we sense the possibility of an approaching horror, yet we are slowly brought closer, captivated, we cannot help ourselves, unable to look away.
As a producer, director, and actor, Kasch has shown a predilection for difficult work, in particular, plays with challenging, highly charged psychological subject matter. Jessi May Stevenson is emerging as one of our most intelligent young actresses, coming off a brilliantly moving performance in Santa Paula Theatre Center’s Mullingar, and deftly directing Becky’s New Car, she is more than ready to take on a part that pushed the great Michelle Williams to her limits. Don’t miss it. At Namba.