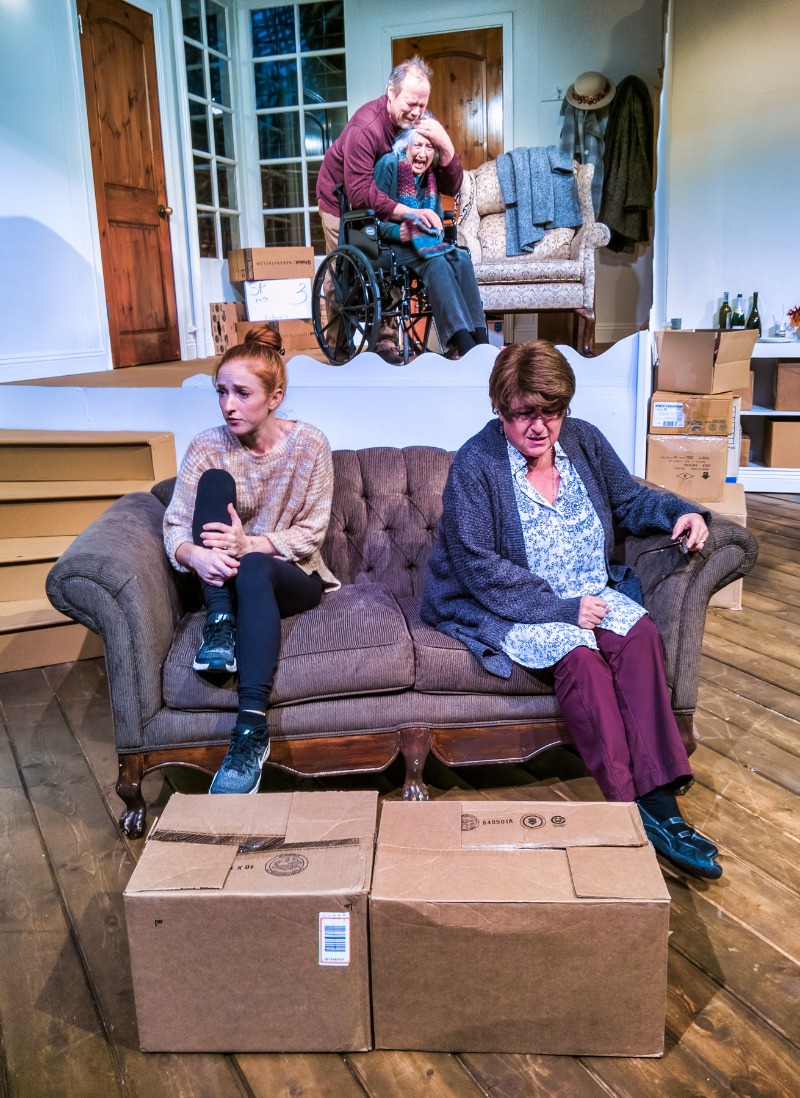 Ventura 12February 2019 --  The Santa Paula Theatre Center kicks off a tremendously interesting 2019 theatre season with Stephen Karam’s Tony Award winning The Humans starting at the beginning of February and running until 10 March.  The Humans is a multi-leveled, complex sprawl of a play constructed around a Yonkers family’s Thanksgiving dinner at a daughter’s “walk down” ground-floor apartment in contemporary lower Manhattan.

This SPTC season features five strong dramas by some of our best playwrights, including Edward Albee’s Seascape, and what some feel is Neil Simon’s greatest play, Lost in Yonkers. If there were ever a time to get a season ticket for the entire run of one of our best local community theatres, this is the time to do it.
The season will also feature some of our best locally-based directors, starting off with Jessi May Stevenson directing The Humans, followed by the inimitable Taylor Katsch directing Kae Hawley’s Complications from a Fall.

Harvey Fierstein’s witty romp, Casa Valentine will round out the season’s five offerings.

This is an extremely ambitious program for a community theatre to take on, more on par with a strong professional company’s offerings, definitely more than some of our regional professional companies have taken on recently. This is great theatre; theatre to sink your teeth into, with tough, juicy parts and directorial challenges throughout. More than half of this program features plays that are essentially beyond the abilities or scope of most community theatre companies.  We are truly fortunate in the 805 to have community theatre groups with this much guts and willingness to take chances on great dramatic plays.

Rumors are that Michael Perlmutter, who is featured in the currently running The Humans, playing the father, Erik Blake, will don his directing hat for the SPTC later in the season.  Perlmutter also writes plays, premiering his Directing Hamlet a while back at the Elite Theatre in Oxnard.  Perlmutter is on a bit of a roll lately coming off well-received performances in Sharr White’s The Other Place, and Conner McPherson’s The Seafarer.

The Humans will introduce Emma-Rose Allen,  in her first professional-level part after high school, playing the host daughter,  with Hayley Georgeanne Cariker playing her sister. Cariker is a bit of a ringer: her bio says she’s back on the boards after an 18-year absence and talks about her horses, but she clearly knows how to deliver a line and has some serious acting chops she could not possibly have acquired in the barn, unless that barn happened to be the SPTC barn.

Our beloved Rosalee Cavillo plays the grandmother, Fiona “Momo” Blake. We will not mention Rosalee’s age, but she’s taking on parts and driving around town to plays and rehearsals with her husband Ernie, supporting and participating in our local theatre at an age when a lot of other people can barely walk or remember what they had for breakfast, let alone memorizing lines for a full-length drama.

The Humans also features Angela DeCicco playing the mother. We rarely get to see what DeCicco can do. Since DeCicco carried a production of Uncanny Valley at the old Elite backstage--a somewhat flawed script that needs some perceptive acting to pull off decently--DeCicco has typically played in relatively one-dimensional parts that do not come close to stretching her abilities.

DeCicco will definitely get a chance to stretch her abilities in The Humans, as well as all the rest of the cast, director, and crew.  The script is devilishly tricky, requiring tight ensemble acting, a thorough psychological understanding of the parts, and technically well-executed set design.  While it is not Checkhov, The Humans does present timing and character-realization challenges capable of pushing everyone in this cast to their limits.  It will require the actors to really listen to one another and interact, not just spout lines inside their own little private drama.

The Humans is a drama of unveilings, personal revelations, a layer by layer unpeeling of a huge family onion, with virtually every member self-consciously fighting against seeing the whole onion.  The trick is, the audience has to see the whole onion, even though no single character in the play is capable of doing so. No mean trick for a director and cast to pull off. They will have to dig deeper and get to the place where they can work as a tight ensemble. Karam’s play is more like a symphony:  it won’t work if the woodwind section is out of cue. In that sense, it is a director’s play, one that will ask a lot of any director while pushing each actor to their limit.

I saw it this past Sunday and couldn't agree more. Fantastic choice for the community with a confident, capable follow through. Worth an extra weekend of production just in case the marketing didn't hit everyone in the area.

0 Cancel Reply
I saw it this past Sunday and couldn't agree more. Fantastic choice for the community with a confident, capable follow through. Worth an extra weekend of production just in case the marketing didn't hit everyone in the area.
Cancel Update Comment

I'm excited to find this place. I can't wait to come for my first time.

0 Cancel Reply
I'm excited to find this place. I can't wait to come for my first time.
Cancel Update Comment