Review: Agnes of God at the Elite 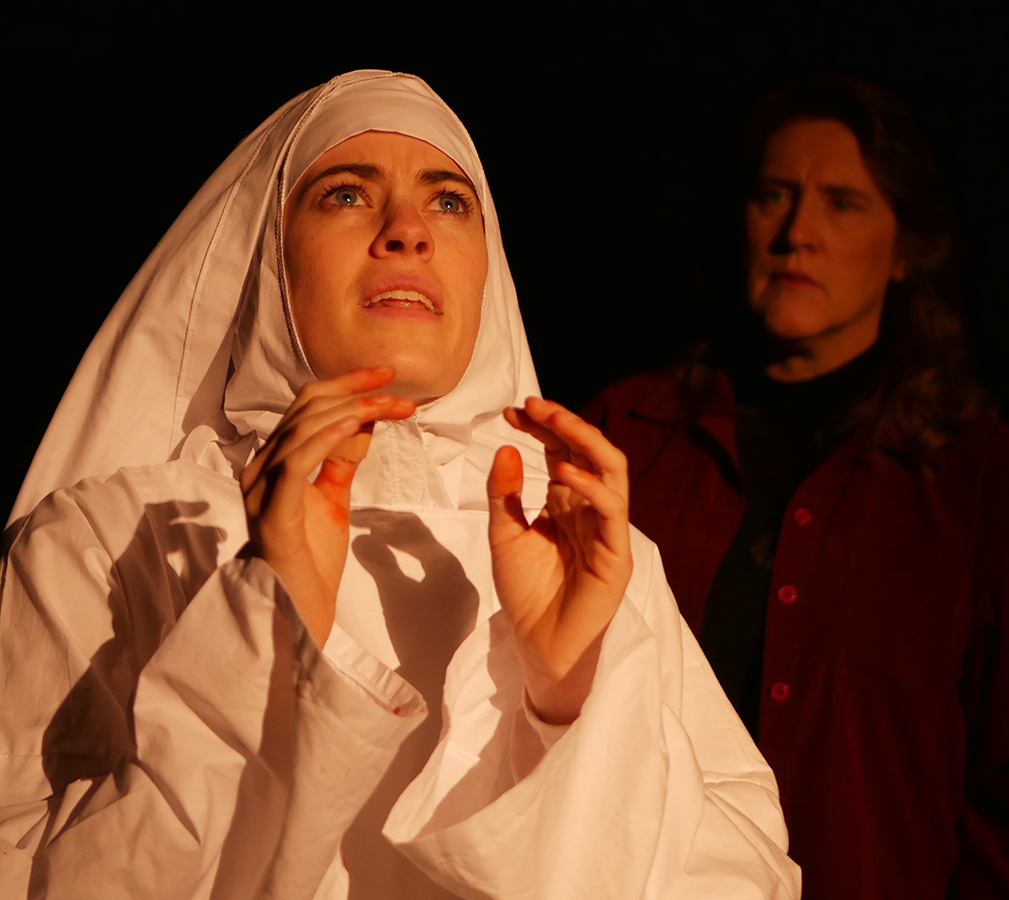 Theatre
A well-worth seeing production of Agnes of God is currently playing at the Elite theatre in Oxnard. It is the first play in a season of challenging and important plays by the Elite this year. Season tickets are highly recommended.
As the play opens, we are given to believe that Agnes is a young woman who has evidently murdered her newborn child while living in a Catholic convent. She seems remarkably and a bit uncannily unhinged and it is up to a court-appointed psychiatrist, Dr Martha Livingstone, with her own Catholic demons to fight, to try and unravel the situation or even decide whether Agnes is sane enough to stand trial. Set as a murder mystery, the play completely upends that genre as it unfolds as a three-way psychological wrestling match between Dr. Livingstone, Agnes, and Agnes’s Mother Superior, who is herself not all she at first appears to be.


Photo credit:Joe Orrego
In the decades since the play’s premiere in 1979, the play has aged extremely well. In fact, it may be more relevant today than ever. It is by far the best play the playwright, John Pielmeier, has written and is one of the more significant plays written in the last 50 years. The Elite gives us a thoughtful, extremely appropriate interpretation of the play for our current times.
Agnes of God is not an easy play to do, especially for a community theatre. It is a thoroughly thought-provoking play, one that can challenge the best professional companies. It requires three strong actresses with considerable technical range, insightful direction, and a keenly thought-out staging and set design. The Elite comes through on all counts. 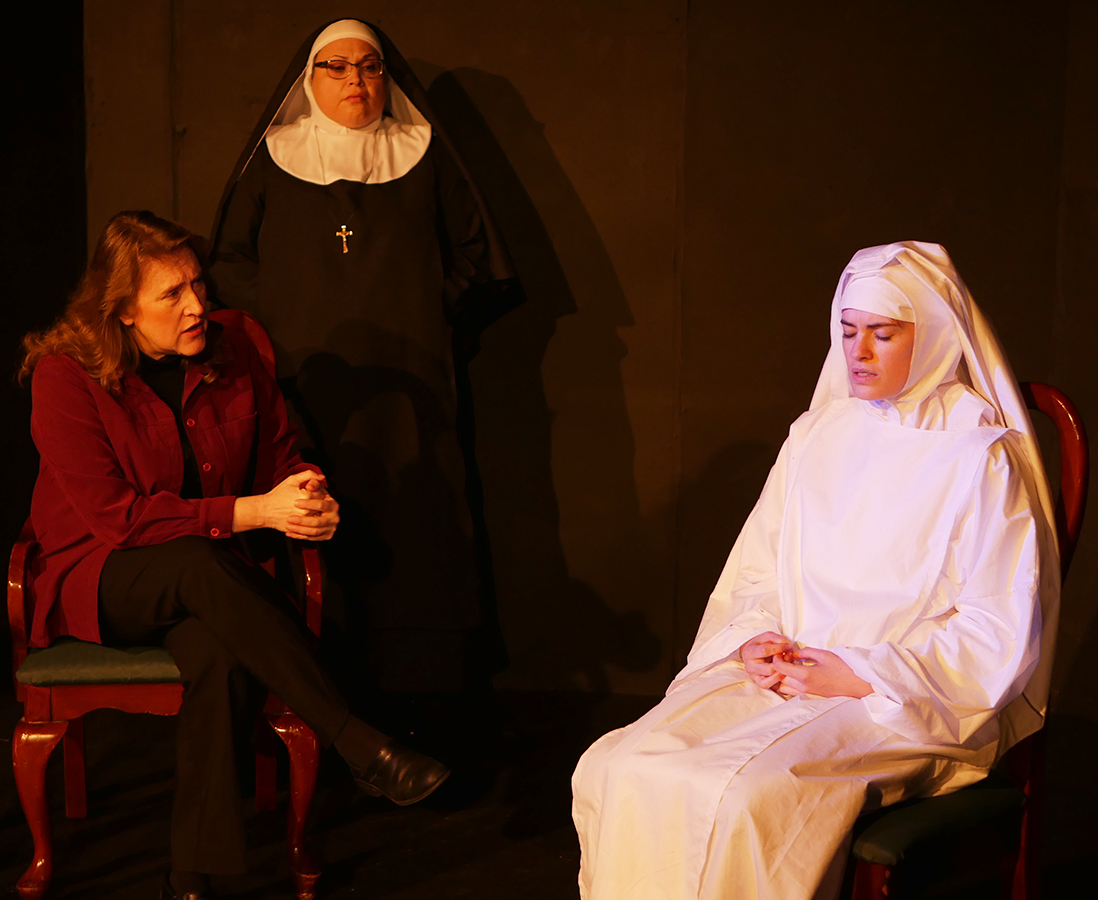 Lynn Van Emmerik, Celeste Russi, and Abbe Fralix in  at the The Elite Theatre Company
This type of play, where a few actors and a strong conception can come through, is where smaller community theatres can reach their best moments, when only a few characters do challenging roles in a play that works well in a relatively stripped down production that does not require the physical resources available only to the most lavishly funded companies.
Accordingly, when Agnes of God first came out in the early 80s it was a sensation and quickly picked up by a host of smaller, more avant garde professional companies. The role of the Catholic Church in the play was seen at that time as far more controversial and alarming to audiences in an age before the full revelations of subsequent decades. These productions frequently presented highly compressed, highly emotional productions that built on an accelerating pace and emotional crisis plunging toward the play’s inevitable conclusions.
Today we have much more distance and awareness of both the underlying issues in the play and our perspective on religions and the Catholic Church. It is much easier today to see that the play is not really about the Church, but about abuse, the mind, and the ways human beings lie to themselves and create systems of authority to hide and use those lies. It is a play intended to challenge certain ways in which we are prone to think, or things we accept without challenge, but may hide uglier truths.
Accordingly, Tom Eubanks’ Elite production, which also features Eubanks lighting and set design, is a cooler, more open production. Eubanks lets the pace slow and the layers of the play build upon each other. The reality underlying the play grows more naturally, creating its own shadowy momentum.
This approach creates a different kind of psychological tension more appropriate to our time. It is a deft re-telling of a tale that emphasizes the role of the mind and our efforts to get at the truth hidden beneath a web of obfuscation.
Early productions of Agnes of God also tended to feature over-the-top performances by whomever played Agnes, and angrier, more emotionally charged interpretations of Dr. Livingstone, the psychiatrist.
Lynn Van Emmerik and Eubanks give us a cooler-tempered, more thoughtful Dr. Livingstone, one who is shadowed by her doubts and less willing to revel in the confrontations with the Mother Superior. In this production the weight of the play is more evenly distributed between the three women, with emotional dynamics thus creating a more truly triangular enmeshment, much more in keeping with how the play reads on the page.
This evenness is helped immensely by Celeste Russi’s outstanding Mother Superior, the part usually given to the weakest actress in the ensemble, but in this case it is quite the opposite.
Abbe Fralix gives us a much more angelic Agnes, one emphasizing her frailties, pain, and vulnerability, clearly underlying her role as the true victim of the situation. Agnes can be taken in an entirely opposite direction, as a defiant, force of nature-Agnes, who just may be who she is claimed to be; but Fralix’s Agnes is much more in keeping with Eubanks reading of the play, fitting neatly into the play’s psychological triangle and more in line with the issues of today, where we are more willing to confront abuse head-on and look for ways to prevent the perpetuation of the cycles of abuse and human suffering.
This approach also makes the play much more watchable. The streamlined set lets us use our imaginations and gives us some distance and a chance to see the play’s more cogent sociological message. In many ways, this production is more entertaining than the productions of the early 80s, but those were different times with different expectations. Eubanks and his excellent cast have brought us a timely, appropriate, thoughtful production of an important play reset for our own no-less disturbing times.
_______________
Agnes of God by John Pielmeier
Directed by Tom Eubanks
Starring Lynn Van Emmerik, Celeste Russi, and Abbe Fralix as Agnes
With set and lighting by Tom Eubanks
Production staff: Stephanie Rice, Pat Lawler, Jaye Hersh, Beth Glassner
Elite Theatre Company
Call 805.483.5118 or elitetheatre.org for tickets and information
Season subscriptions available [5 plays] $85 general, $72 senior, military, and student
________________________________
Artist Opening:Joe Cibere
Review: Devil’s Music That Saves Your Soul