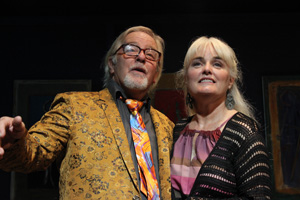 Mad Gravity, the latest zany comedy presented by Flying H Theatre is set "in a strip mall home" [read modest mid-to lower-middle class suburban California home, aka Flying H's strip mall theatre] that has been altered in a certain manner not to be disclosed here. On opening night it played to a fully engaged, enthusiastic audience typical of the young, hip, and savvy audiences Flying H attracts. 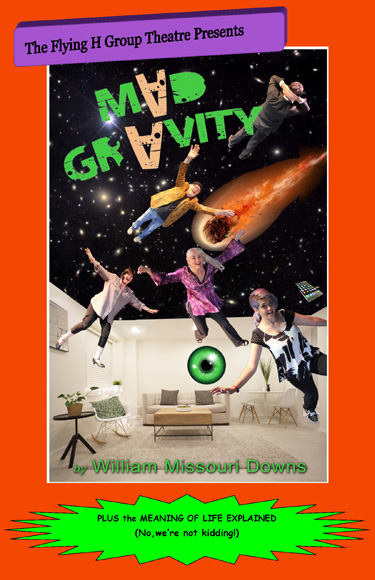 The play is a semi-absurdist mix of extremely improbable situations and events played for comic effect. Deeper issues are interposed, then thrown away for the most part, as the real intention here is to sustain comic possibilities, rather than any deep, thoughtful development. Which is OK, though it also implies that the play, with careful re-writing could be developed into something much more than what it is as written today.

What makes this play work as written is the strength of the acting and production support offered by the Flying H personnel. The acting is strong throughout. There is some over-acting, but that often comes with the territory in neighborhood comic theatre.

Taylor Kasch, Flying H theatre's founding Artistic Directory, plays the lead, husband/father Archie, with all the ease and mastery we have come to expect. Archie's wife, Eudora, is ably played by Brenda Evans. The play is set in Archie and Eudora's home as they are about to receive a visit from their daughter's fiancé's parents, and eventually the potentially betrothed couple themselves.

Or, that is the plan initially presented to us. But things don't turn out so clearly and the madness begins soon after their daughter's fiancé's parents arrive. To be fair, we are given fair warning that all is not as one would expect via Sam Sullivan's prologue as Archie and Eudora's daughter, Dakota--a prologue that begins to disintegrate almost as soon as it begins.

This prologue immediately addresses the audience and hints that much of the play may involve playing around with the "fourth wall" [that is, the invisible fourth wall between audience and stage that is conventionally not broken in most traditions of proscenium-stage theatre]. The fourth-wall jokes eventually get a bit old and tiresome, but also give us some of the play's most delicious comic moments.

Scott Blanchard, playing Joe, the fiancé's father, is particularly good at this comic address of the audience, and one of the great discoveries of this production. In general, there is something extremely appealing about Blanchard's stage manner and acting technique that shows great promise for work far beyond the range of this comic vehicle. He has a certain strength of presence, voice, and timing that make us want to see him in a much more serious major role in a full drama. 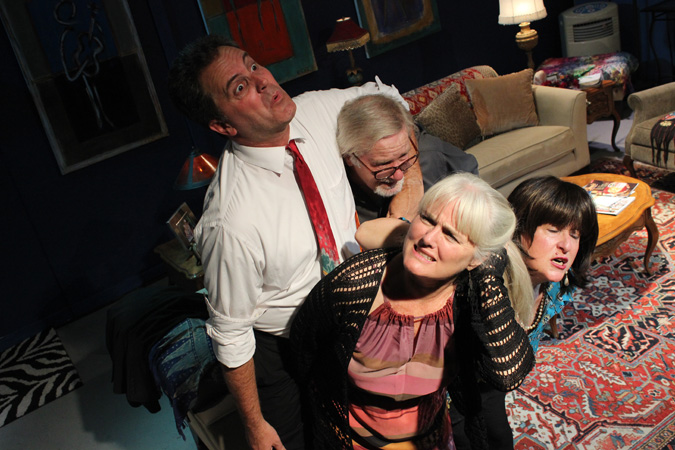 Angela DeCicco is pitch-perfect as Mary, Joe's rather repressed wife. Decicco has to play what is at base a rather distasteful character, who for the most part is a foil to everyone else's shenanigans. This is always a tricky thing for any actor to do. Decicco's Mary eventually gets her own inner transformation toward the end to considerable comic effect that is able to sustain, even save, the comic force of the play down the stretch.

Flying H has the teenage daughter of Eudora and Archie played by an actual teenager, the delightful Sam Sullivan, in a rather gutsy move, since the part is not an easy one. The fiancé is also played by a young actor, Trent Trachtenberg, in what is little more than a cameo role.

The play is billed as a two act play, but is really a modestly scaled one act with an essentially irrelevant post-logue tacked on. The post-logue is more for the audience's enjoyment and has little to nothing to do with the rest of the play.

If there is a weakness in this play, it is in its writing, not the production, and certainly not the acting. Most importantly, the audience seemed to enjoy it immensely. For some, the glib throwing away of deeper issues in the face of stretching the content for one more laugh will eventually rub the wrong way; but for these days where even politics and stock markets seem to be little more than a rolling farce, ripe with irrationality, stupidity, outright silliness and low theatre, perhaps absurd, outlandish, humor is just what we should expect, and require, once we arrive at the real theatre.

Review: Rubicon’s Copenhagen
Look stylish for your return to class.