Review: This Isn’t Kansas, Is it? 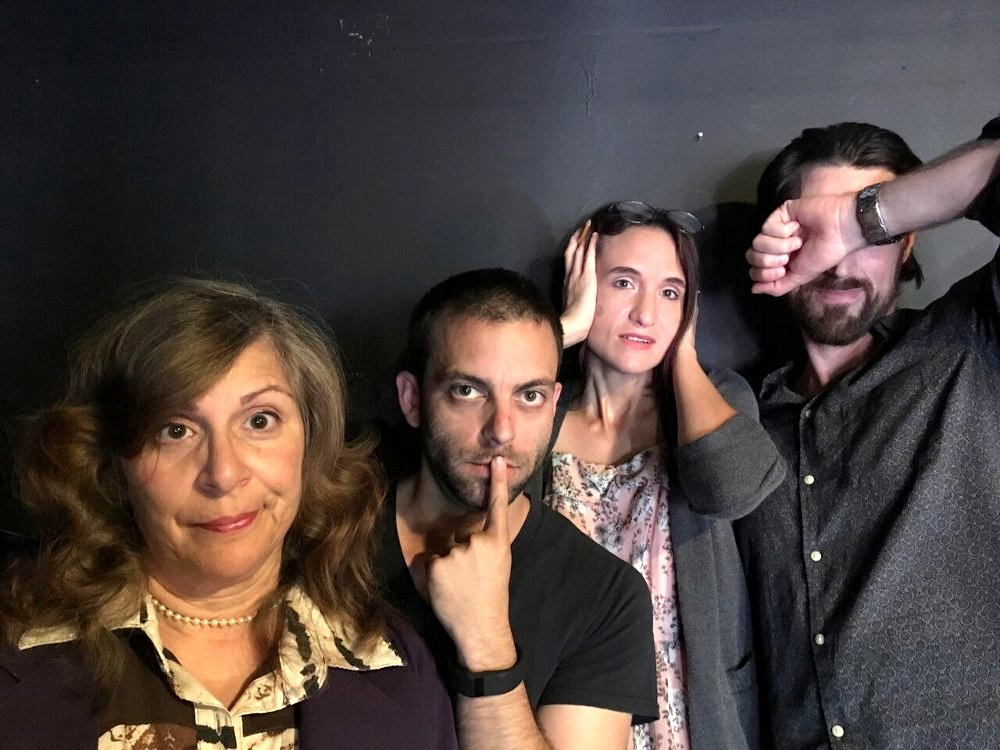 Review-
Flying H Theatre company brings us Peter Sinn Nachtrieb’s The Totalitarians,  a dark and a bit daffy comedy about a political campaign gone awry, just in time for the current political season.
The sad thing is that it may be the last play produced by the Flying H Theatre, which announced that it would be closing its doors after The Totalitarians runs.  This is a serious loss for theatre in the 805 as there is no other theatre here like it.
So hurry before it closes for good and go see Ventura County’s most adventurous theatre, the only 805 theatre that refuses to shy away from adult language, themes, or dress [or undress]. This enables the Flying H folks to produce some of our time’s best and most gifted playwrights; something not possible if a theatre decides to restrict itself, especially in terms of language.
Sure, there are local community theatres in the 805 that will produce such plays from time to time, but Flying H has been hitting us with a continuous stream of wonderful contemporary fare since it opened its doors in 2011. Flying H has also consistently brought more radical directorial, staging, and production ideas to us than what we usually have come to expect on Ventura County’s stages.

Hear No Evil-Anna Strickland, Derek Petropolis, Shelby Maloney, James James
The Totalitarians was originally conceived as a totally over-the-top dark political comedy.  However, when The Totalitarians premiered several years ago, one reviewer wondered how long it would be before it was overtaken by real events. With an ever more absurd political climate prevailing in the United States, the reviewer felt it may not seem so over-the-top by the end of the mid-term elections. No telling what could happen by the time of the next presidential election.
Well, we are now in the midst of that next presidential election and events have proven that reviewer prescient.  After the shenanigans we’ve witnessed so far in the current election, the play doesn’t seem so far-fetched anymore. In fact, it almost seems tamely not that far from reality, though it wanders off in a different direction than our current political reality, which helps preserve the originality of its humor.  Today, only a few short years after its premier, the play now seems more goofy than outrageous.
But it is a wildly entertaining goofy.  Director Richard Kuhlman has also inserted a host of ideas into the production that are considered a bit more radical than what most of the theatres in the 805 usually give us: actors crawling through the audience, audience interaction with props, a multi-faceted minimalist set design, a live weapon on stage.
And, as we have come to expect from Flying H, we get high-pitched, strong ensemble acting across the board. Our local theatres don’t always get a wealth of choices when it comes to casting possibilities, but this production is particularly well-cast, which helps, as it is a play with four very different characters colliding head-on in almost every scene.
Flying H newcomer, Derek Petropolis comes to us from Seattle, armed with an astonishing gift and training in physical theatre technique acquired in part while at Seattle’s famous Cornish College of the Arts [the place where, among many other things, the legendary Merce Cunningham and John Cage met, while working with the equally legendary choreographer, Martha Graham]. Petropolis plays Ben, a manic, conspiracy-theory-obsessed man on the edge of … something, maybe everything.  This play is worth seeing for no other good reason than to see Petropolis’s Ben. An unforgettable performance to say the least.  Be forewarned: Ben’s opening scene is nothing, I mean nothing, compared to what he does later on.
Ben is the patient of Dr Jeffrey, played with all the befuddled slipping-away-of-sanity that poor Dr Jeffrey demands by James James, coming off of his own play An Open Table, in  which he also performed, at the Flying H earlier this year.  At first, Dr Jeffrey may even appear to be the only sane person in the script, but we get clues, early on, that he may be vulnerable to his own short circuits soon enough. The physical theatre interactions between Ben and Jeffrey is probably the most over-the-top aspect of the play at this point in time and they milk it for all its worth.
Dr Jeffrey is the husband of Francine, played intelligently and keenly by Shelby Maloney. Francine is a discouraged, mostly not-too-successful young writer who is trying to turn her life around with a speech-writing gig for a new, unsung candidate running for a state office in Nebraska named Penelope Easter, played by Anna Strickland.
Francine moved to Nebraska to follow her husband, our good Dr Jeff, who found a job, or set up a practice there on the cheap, or something [both are given as reasons in the script]. Dr Jeffrey just wants to make babies and have Francine home with the kids, but is giving lip-service to her ambition to do something more with her life.  Neither is too happy to be living in Nebraska, it turns out. But that is nothing compared to what getting entangled with Penelope Easter gets them.
Anna Strckland’s Penelope Easter is a juggernaut.  Easter is a relatively ignorant Nebraska housewife whose view of life is so shallow she has no clue how far in over her head she can jump. Spewing sexual innuendos at every turn, she is rough, raw, and running for office in Nebraska like an old country sow in full heat.
It doesn’t take long for all this to veer off into a hilarious, wild, crumbling mess. In fact, there is fair evidence that things have crumbled considerably even before the opening scene rolls around.
Fortunately, The Totalitarians, is not our real politics, but it is an easy-to-watch, entertaining evening of well-worth seeing relief from real politics. Don’t miss it.
_________________
The Totalitarians by Peter Sinn Nachtrieb
at the Flying H Theatre
Directed by Richard Kuhlman
Starring Anna Strickland, Shelby Maloney, James James, and Derek Petropolis
with assistance from Susan Franzblau, Taylor Kasch, Brenda Evans, Justin Wood, Max Kasch, and Cyn Killion
through 6 August
15 July- 31 July: Friday and Saturdays at 8 pm, Sundays at 3 pm
4,5,6 August  Thursday, Friday, Saturday at 8 pm
_________
Flying H Theatre at 6368 Bristol Road between Johnson and Victoria, Ventura
For tickets 805-901-0005
or go to www.FlyingHGroup.com site for tickets, information and directions to the theatre. Reservations Highly Suggested .   - See more at: http://society805.com/arts-culture/performing-arts/item/569-acting-rules-at-flying-h-and-elite#sthash.eMOJkwna.dpuf
or go to www.FlyingHGroup.com site for tickets, information and directions to the theatre. Reservations Highly Suggested
Review: Night Alive at SPTC
5 top trends in container gardening