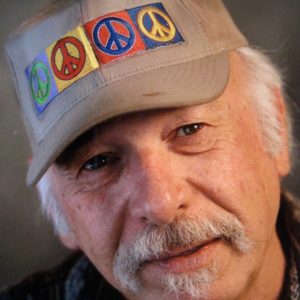 On Thursday 15 May 2018 the Ventura arts community lost one of its long-time leaders and visionaries, Joe Cardella. Cardella had survived a difficult battle with esophageal cancer with the help of his primary caregivers, the photographer and videographer Dina Pielaet, the writer Amy Jones, and Jonell McClain. Joe had been spending time with fellow artists and friends as his strength allowed, but finally the cancer returned with new intensity.

Cardella grew up in Connecticut, had studied at Syracuse University and then spent some time in New York city at the time George Maciunas and the Fluxus movement were emerging in the Soho art scene. In May, 1974 Joe made his way to California. He was struck by the similarity of climate with his favorite place on the planet: the Greek Isles, a place whose charms he had discovered while stationed in Greece in the 1960s as a communications specialist for the United States Navy.

While the climate of the Central Coast found agreement with Cardella’s temperament, its art scene was less so: to Joe it was a clique-ridden, reactionary, xenophobic, woefully behind the times scene full of factions, with pretentious, self-entitled, trust-fund-fueled wannabe overlords running “museums that were little more than garden clubs for the landed gentry.”

Joe set out to change things. For two and a half decades he, with the help of a small army of volunteers, put out a monthly publication call ART/LIFE where artists produced a page and sent the requisite number of copies to Joe, who then compiled them into each edition. The editions never surpassed 200 copies and boasted a subscription list that included libraries, museums--including the Museum of Modern Art in New York--and artists of substantial note in the arenas influenced by Fluxus, such as conceptual art and artists in what would became known as the “artist book/publication” movement.

Joe’s activities galvanized local artists in multiple ways. He co-founded the Artist’s Union Gallery. When another co-founder of the Artists Union, Michael Zelcer negotiated a space for the Union with only a dollar a month rental fee for an ongoing exhibition space, Ventura artists finally had the viable, forward-thinking exhibition space Joe thought they needed to get somewhere. Joe’s full vision for an exhibition space was for converting the large building complex now across from the WAV into a museum of contemporary art. That never happened, but it is more than clear that that would have been a major game changer, not only for local art, but for the town of Ventura itself and the future of its economy.

Joe was one of those artists who always kept his ear to the ground as they say. He went out of his way to keep track of what other artists were doing, who was doing something new in town. He had that rare gift of being able to tell another artist that pithy little bit of insight or information that could help them transform what they were doing into something finer, stronger, more impactful. This may have been Joe’s greatest gift. His true value to the community was his vision and friendship, his great humanity and ability to befriend one and all and his congeniality. But he also pushed people, and for some, he sometimes pushed them too far. For me, Joe always had some tid-bit of crucial information about what some other artist was doing; something that is always helpful for any art and culture editor or arts writer to know. When Joe showed up, things happened; things got done.

When I first met Joe, since I had been a good friend of Maciunas, the founder of Fluxus [in fact, Fluxus was essentially who was on George Maciunas’s mailing list], our first conversations had been around Fluxus and its heritage. Santa Barbara had just gone through an odd “re-discovery” of Fluxus with a series of local events laced with a sense that the locals had just found out what Fluxus was, decades after its hey-day. We had a good laugh about that.

In spite of a couple of decades trying to move the local art scene in a profoundly different direction, I’m not so sure Joe’s opinion or sense of where the 805 art scene stood was much different by the time he passed. One of my last conversations with Joe, only weeks before his death, had been tinged with a resigned cynicism and the statement about local museums I quoted above. He was particularly negative about the state of affairs at the Museum of Ventura County and all the stupid bickering between Ventura’s incessant factions. “It’s past time for Ventura artists to grow up,” he said; and it was said not with anger or spite, but with bitter sadness, a longing for things to be other than they are.

Throughout his life, Joe was infused with a will for people to be the best that they could be. That, to me, is the core of Joe’s legacy and who he was, for though he was a good friend of many, including my wife, Rhonda Hill and myself, he ultimately wanted to feed the best in people, to, above all else, be a man who did everything in his power possible to help everyone around him be the best person and the best artist they could be. And for that, we, I, will sorely miss him.