Review: The Diary of Anne Frank 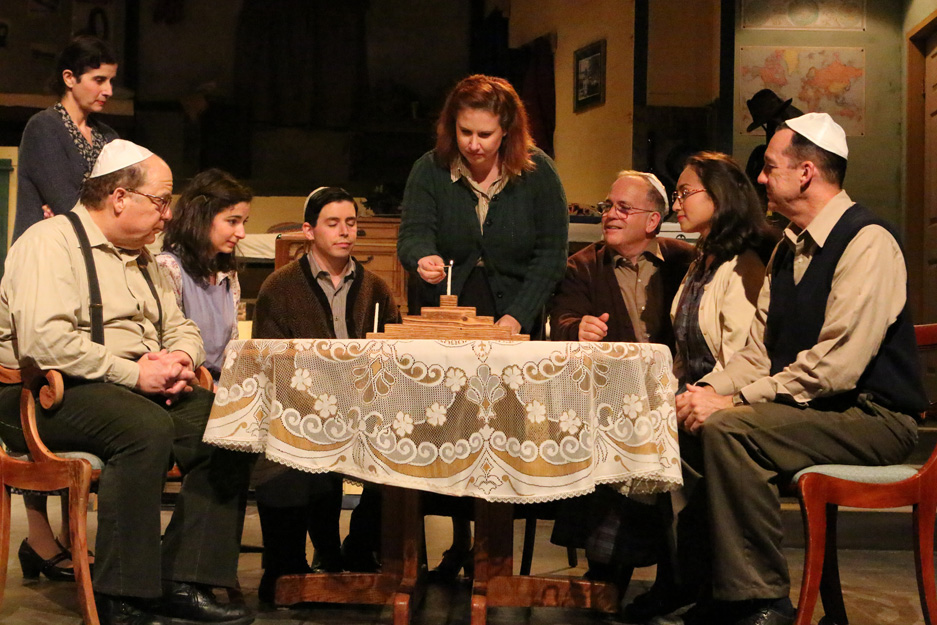 Review
The stage play The Diary of Anne Frank, which made its debut at the Conejo Players Theatre last night, is not just a living testament of the horrors of the Holocaust, but a moving celebration of the human spirit. With all the barbaric and monstrous acts against humanity that took place during this period, Anne Frank's diary, on which the play is based, was one of many works of art that transcended the devastating events during World War II. The original play was written by two screenwriters, Francis Goodrich and Albert Hackett in 1955, three years after the publication of the diary. Although it was warmly received, Goodrich and Hackett's play was later criticized for sanitizing Anne's work, removing passages dealing with Anne's sexuality and her pride in her Jewishness. In 1997, Wendy Kesselman restored these elements in a revised edition that elevated it from an impassioned, but flawed "feel-good" story about survival to a highly textured, emotionally rich portrayal of a remarkable young woman and seven other refugees at the most perilous time in human history.
Director Rachael Weinberg Pugh uses her middle name in her credit to reflect the deeply personal approach she has taken in presenting the play. Pugh was compelled to direct the play because of her own personal history: her family includes survivors of two genocides, of Jews by the Nazis during World War II, and of Armenians by the Ottoman government in 1915.
In utilizing Kesselman's adaptation, Pugh has assembled a remarkable cast that included, like her, performers with personal histories of their own that have made the production even more powerful and relevant. The cast is led by Katie Rodriguez, a young actress and graduate of the American Musical and Dramatic Academy (AMDA), who bears a startling physical resemblance to Anne Frank. Rodriguez's performance as Anne is stunning. It is one of those performances where you don't see an actor, you see the person she is portraying. Rodriguez's Anne is a complex amalgam of emotions that reflects the young girl moving into puberty as she begins to experience feelings of self-awareness, not just as a Jew, but as a woman. In the beginning, she is naively girlish, viewing her family's self-imposed incarceration in the Amsterdam annex as an "adventure." Everything is musical to her, even the pealing of the clock chimes on the street that irritate the other inhabitants of the annex. Her energy is boundless as she runs around her confined quarters, chattering endlessly, and clumping around in a pair of red high heels. Her youthful exuberance is presented in direct contrast to the more somber countenances of the others in the annex.
As the play progresses, Rodriguez reflects the subtle changes Anne is undergoing as an increasingly mature young woman. She begins having nightmares, quarrels with her mother, and most of all, develops feelings for the older boy, Peter, whose family shares the annex with the Franks. As Peter, Daniel Jared Hersh gives an equally nuanced performance. In the past, Hersh has portrayed more outgoing, comical characters in shows such as Spamalot, Forever Plaid, and Thoroughly Modern Millie. In The Diary of Anne Frank, Hersh gives probably his best performance to date, playing the shy, withdrawn, and awkward teenager who is afraid to show his feelings for Anne. Hersh's comic abilities come forth, however, in the touching scene where he and Anne finally reveal their affection for each other.
All of the actors have impressive "moments" in the play where they show extraordinary understanding of their characters. These include the other refugees: Natasha Schlaffer, as Anne's older sister Margot, the studious, "preferred" daughter, David Parmenter as Anne's father Otto, who holds a special emotional bond with Anne, Joanne Zahorsky-Reeves as Anne's mother, Edith, Dale Alpert and Karen Brundage as Mr. and Mrs. Van Daan, Peter's parents, and Larry Shilkoff as Mr. Dussel, the dentist who joins the two families in the annex. Rounding out the cast are Marisa Van Den Borre as Miep Gies, the young employee of Otto Frank who brings them food and other necessities each day, and Robert Reeves as Mr. Kraler, a business associate of Mr. Frank who helps harbor the families as well.
Karen Brundage is especially effective as Mrs. Van Daan, notably in her frequent domestic squabbles with Alpert as Mr. Van Daan. David Parmenter is exceptional in the highly moving epilogue, where Otto Frank re-enters the annex after the war, the annex's only survivor, and discovers Anne's diary. (In reality, it was Miep Gies who found the diary and presented it to Frank.) In this heart-wrenching scene, Parmenter tells of the fates of the members of his family and of the Van Daans in a disquieting, desolate, yet masterful coda to the story.
The production staff, under the co-direction of Pugh, Rick Steinberg, property designer Abby Cluster, and most notably, Pugh's mother, Kimme Black, have done an amazing job in recreating the annex, carefully examining photographs of the actual location and reproducing furniture and accessories down to the finest detail, including the vintage radio on which the refugees listen to news from the outside world, and even the pictures on the walls and red plaid fabric on Anne's diary. Alex Choate's sensitive lighting highlights Anne's occasional monologs to the audience and directs viewers' attention to highlighted activities on the set, a production factor that is crucial to a story where all eight principals are on stage for nearly the entire play.
In one of the many direct quotes from her diary in the script, Anne talks of her legacy, saying, "I want to go on living - even after my death." Thanks to plays such as The Diary of Anne Frank, her wish has been assured.

Review: A Glimpse at Godspell