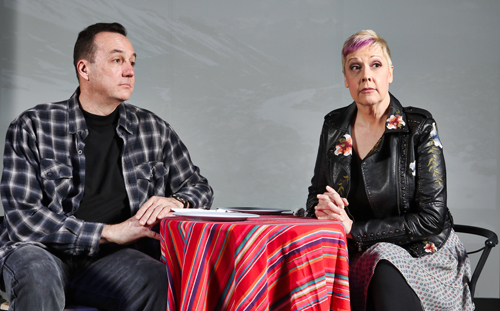 Theatre
Review
Steven Dietz's This Random World at SPTC
Santa Paula Theatre Center kicks off its 2018 season with a wonderfully good production of Steven Dietz's This Random World. SPTC produced Dietz's Becky's New Car last season as well; but these are two very different plays with little in common except Dietz's genius for fascinating female parts; a beautifully controlled, understated sense of humor; terrific writing; and Dietz's particularly good-hearted, slightly off-kilter somewhat philosophical bent.
The play combines a minimalist staging approach with a vignette-like scene progression portraying scenes from a cluster of people's lives that intersect in highly coincidental ways. Dietz's writing is remarkably controlled; carefully avoiding or throwing away dozens of more predictable possibilities to get the fascinating core sequence of this play, which is as much about what does not happen as what does. No word is wasted in this gentle, thought-provoking drama.
The play is best seen more than once. Because the play exploits so much serendipity and lost possibilities that a second viewing where we already know where everything is going, or not going as the case may be, will reveal completely different points of humor and insight than the first viewing. Though nothing will replace the wonderful little jolts of the first viewing.
All in all, it is a delightful play done with full understanding and sensitivity by a well-cast cast and solid production crew. This production has a lot of the spirit of the old Flying H Theatre, and no wonder: with Taylor Kasch at the helm and with both production crew members and actors that did a lot of work at the Flying H. Of particular note is the excellent projection design by Kathleen Bosworth and the original music/soundscape by Cynthia Killion's son, Sean Howard, who is in the Cal Arts doctorate program for music.
The production has, thankfully, Taylor Kasch written all over it: a satisfyingly visual staging with totally integrated sound-scape, full exploitation of a minimal set, lighting concept, and ensemble acting.
One of Kasch's directorial challenges is balancing the terrific acting of three of the female performers. Part of this is Dietz's doing: he has a tendency, seen in other plays as well, to give more of his best lines to the female parts. The other part has nothing to do with the other actors--they do nothing amiss, it is solid ensemble work all around--it is just that three actresses [Killion, Scott, and Sandefur] catch and convey the essence of the play with a peculiarly sympathetic depth that drives deeper than the rest of the acting.

Sierra Hall (L) and Susan Muhrer
Cynthia Killion is an extraordinary Beth Ward, better than the acting in the part in Dietz's premier cast. Her work is set off by her impeccable timing and tone, transcending the level of the rest of the production. Aileen-Marie Scott delivers a great Claire with a near-obsessive energy that builds and drives the humor home. Shelby Sandefur gives us a well-understood Rhonda, interpreting it solidly within Dietz's concept and this helps every scene she is in.
Scott Blanchard, who has worked with some of the others on Flying H productions, is a well-cast Gary. We feel his frustration and confusion, especially in the Nepal scene. He needs a thicker parka or something, though--or maybe a knit cap so he can take his hood off and free up his head acting a bit as has been done in other productions. Killion is so good in this scene she practically turns her parka into an additional character.
This Random World is the first play in a deliciously ambitious 2018 season for the Santa Paula Theatre Center. The last play is not announced yet, but what is known is a first-rate line-up of wonderful plays to see: Mamet's legendary American Buffalo, Nick Payne's not-to-miss Constellations, and a Sam Shepard's Sam Shepard, True West.
This is tough, gutsy theatre programming in a season where even some of the best local professional theatres seem to be taking a step backward into safe, somewhat hum-drum programming, showing overexposed musicals, one-person reviews for the sake of budgets, and, basically, in many cases, works that are not much beyond the high-school repertoire. It is good to see theatres who are willing to buck this descent into boring mediocrity and show superb, tough-minded drama, new work, and premiers, who help develop new--and old--local talent. This last year saw several theatres in the 805 working more interestingly. It can only continue if we, the audience, support it.