Flying H Theatre Delivers Hilarious B-Movie Parody in “Women Behind Bars”
VENTURA – After a prodigious beginning--15 full-length plays in its first 20 months,
exploring some of the most provocative theatre of our times--Flying H Theatre jumps
off into a new direction with Tom Eyen’s Women Behind Bars. Eyen’s play is a loose,
full-steam-ahead comedy based on one the most quality-averse, tasteless, and overexploited
genres in world cinema: the women-in-prison B-flick.
A funny-enough concept in itself, but in the hands of Founder and Artistic Director
Taylor Kasch’s direction and a large, able cast, this production is hilarious. 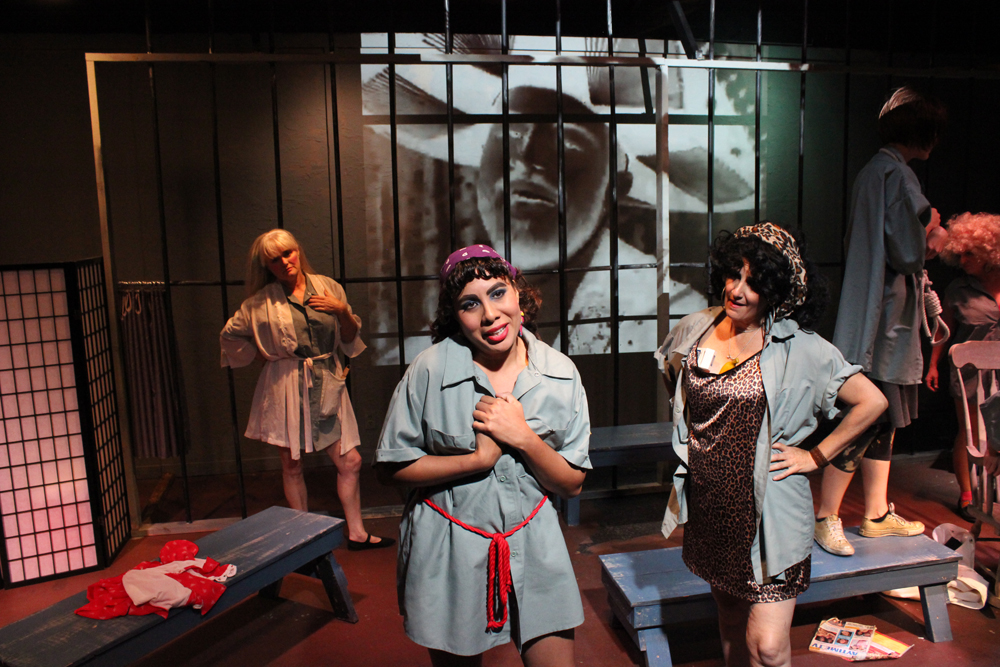 Brenda Evans, Juliana Acosta and Sandra Demogenes,  Photo Credit: Larry Swerdlove
A funny-enough concept in itself, but in the hands of Founder and Artistic Director
Taylor Kasch’s direction and a large, able cast, this production is hilarious.
Running till 1 August [exact times and info below] Women Behind Bars is essentially
one of the best cheap fun dates in Ventura county today.
Flying H brings its savvy sense of irony and savage fun to this goofy spoof of a genre
notorious for its incredibly terrible productions, laughably bad acting, and ample
displays of flesh. In the films, actors are typically cast in ridiculously overdrawn
stereotypes and placed in a predictable set of scenes and situations. Eyen manages to
skewer most of them, thus parodying something that is fairly ridiculous to begin with.
Never seen one of these movies? Not to worry, Flying H helps you out by screening
appropriate outtakes from actual 1950s movies on the back wall during many scenes,
a device that oddly adds to the complete whackiness of the proceedings. 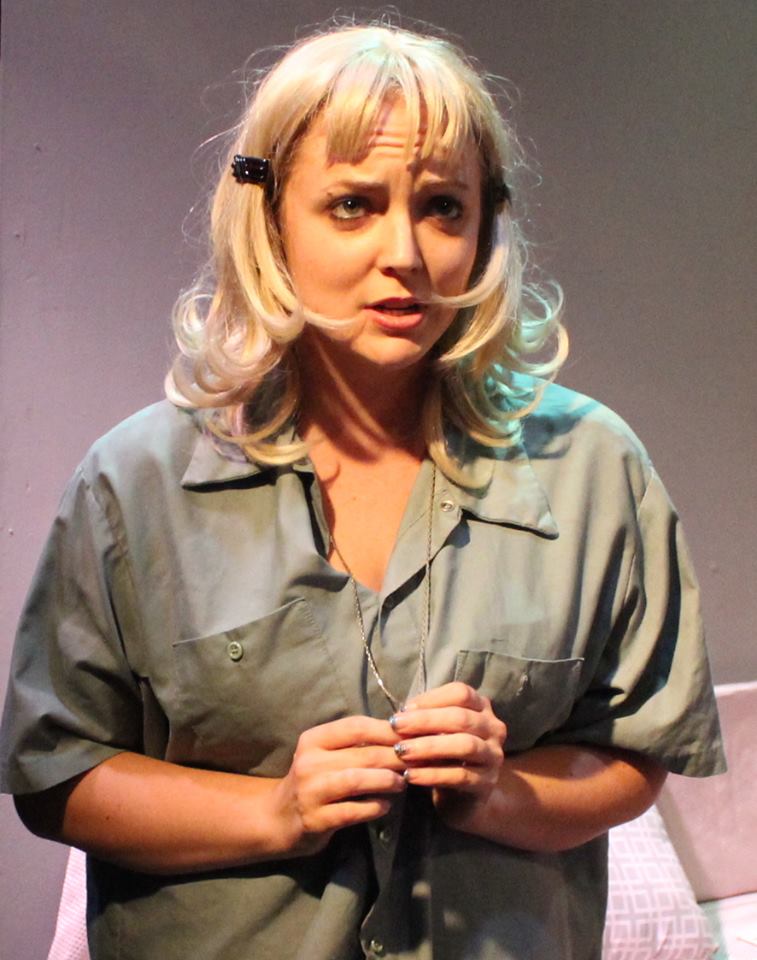 Most all of the major character-stereotypes of the genre are here: you have the young innocent, played by *Megan McCorkle, framed and committed to hard time, raising the crucial question: Will she be corrupted or saved by the hardened Betties behind bars?
She is thrown into a twisted sisterhood lead by the big mama of the prison played by Flying H Managing Director and Co-Owner, Cynthia Killion; the incorrigible prostitute played by Kathryn Miller; and the dark, dope-dealing hustler played by Sandra Demogenes.
Joining them are the obligatory crazies: The maybe/maybe not crazy, but definitely odd, and always entertaining, Puerto Rican sister, played by Juliana Acosta; the Blanche Dubois delusional played by Brenda Evans; and Shelby Maloney’s “Ada” who takes the cell-block-crazed-chick idea to a hilariously surreal level of verbal zaniness.
There is the rarer, and almost exclusively American, character-type of the bible-belt lifer, played most ably by Nancy Solomons, who spouts scripture not quite as heartily as she lusts after female “chicken” flesh.
This menagerie is lorded over by Paula Maxwell’s perfectly inflected sexually bi-valent
evil prison matron. She is assisted in her evil doings by her transgender second,
Louise, played by a hulking Robert MacNeal wearing some bra architecture that looks
like some demented medieval engineering project, spoofing an entire history of
assorted prison matron accomplices. Noreen Ednave’s prison guard supports their rule
while wielding an automatic weapon almost bigger than she is.
An array of bit parts for males that interact with the prison population is handled by
Johnny Avila. While this genre is noted for its terrible portrayal of women, to be fair,
the men in this genre are rarely portrayed in a very flattering light either. It’s
typically a genre full of the dregs of humanity across the board. That’s part of the
fun: everyone gets to play the dark side. It’s also, as a genre, totally, ridiculously,
non-PC. 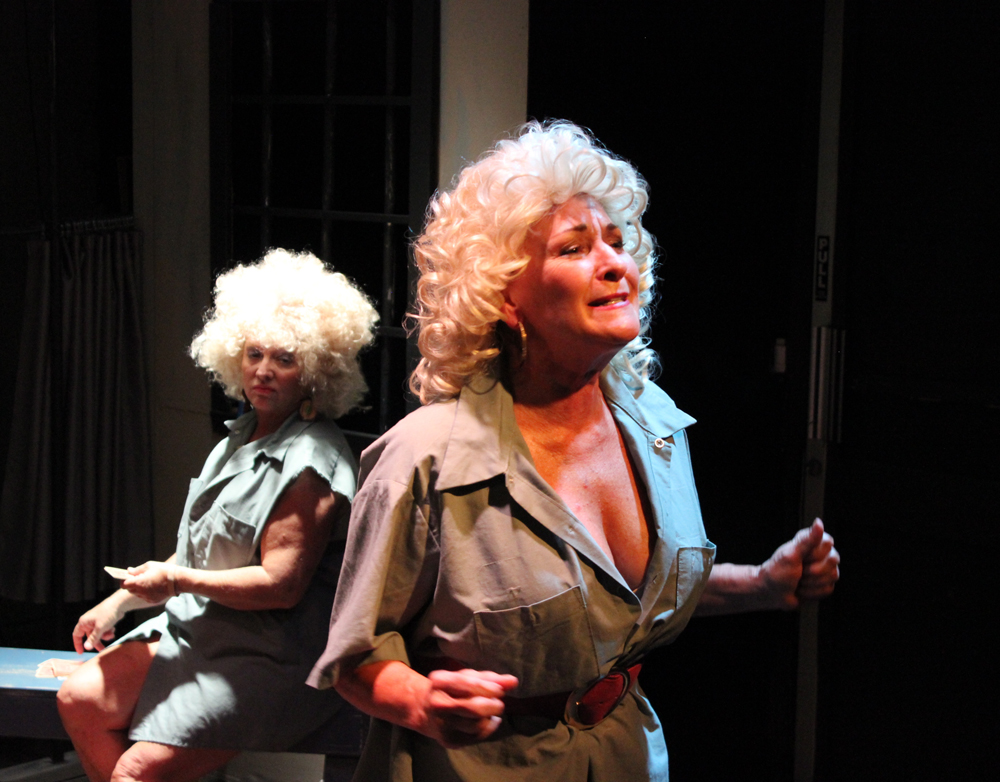 Cynthia Killion and Kathryn Miller Photo Credit: Larry Swerdlove Cheri pouring her heart out
Whipping It
Before I attended Women Behind Bars, I was cautioned multiple times that this play is
not typical Flying H fare; that they usually do plays with significant social
meaningfulness and import, that this play is not one of them. It’s just fun.
Which it is. On one level.
But on another level, all I can say is that Cynthia and Taylor can’t help themselves,
for this genre and doing ironic productions within it has a long history full of sexual
politics, and significant social issues.
Known in the current critical literature as the women in prison, or WIP [often
pronounced “whip”] genre, it has cinematic sources going back to the 1930s. The
films have at all times been driven by written sources. These include literary sources
going all the way back to the Marquis De Sade and Enlightenment pornography and
before. There have been resurgences during the Victorian era, the Great Depression,
and after World War II.
In fact, WIP stories have appeared as part of a backlash to every major pro-women’s
rights movement in the last 150 years. And, remarkably, have been co-opted via irony
and parody, even total transformation, by it’s social-political enemies each time. This
genre was one of the primary drivers in the growth of post-World War II pulp fiction
and the “pocket book” paperback publishing revolution in a tale of significant
unintended consequences. Something I will go into in more detail later.
In film, it has spawned a number of sub-genres, most notably the jungle prison escape
flicks often shot in third-world countries. As far as sexual imagery, WIP films have
included everything from mild late-night-style titillation to softcore to explicit sex,
especially in the third-world jungle sub-genre shot outside the control of legal
sanctions and major distribution networks, where one of the best examples is still
banned in many countries because the lead actress was only 16 when the film was
shot, even though she demonstrates considerable acting chops, especially for this
genre.
The foreign produced sub-genres are frequently plagued by really bad translations, or
even long passages without any subtitling at all, a situation exploited by Women
Behind Bar’s Noreen Ednave’s guard to hilarious effect.
In America, in the 1950s, these movies were known by a plethora of slang tags, such
as babes behind bar B-flicks, or BBB, pronounced “three-B” in the sense that they
were supposedly two grades lower than typical B-movies, or sometimes “Triple B”
flicks, later corrupted to “Triple D” flicks in reference to the ample cleavage usually
on display, and were commonly drive-in movie fare. Few people in America had any
idea there were cinematic precedents in the 1930s, literary sources, or foreign
lineages.
In most cases, the 1950s productions were so awful, they were funny. Camp
possibilities were quickly recognized. Even before its hey day had run its course in the
late 1960s, deliberately campy satires had appeared. This helped fuel the genre’s
remarkable staying power with better-funded productions into the 1980s, eventually
morphing into a completely different beast by the time of Netflix’s massive,
streaming hit, Orange is the New Black, with solid acting, tight writing, and much
higher production values--not to mention completely different social and political
values and intentions.
One of the earliest American examples, Caged [1950] which more or less started the
onslaught of American B-movies in this genre, features the plot parodied by Flying H’s
Women Behind Bars: a teenage newlywed is framed during a robbery and imprisoned.
The moral thrust of the movie revolves around her corruption in prison. To give some
idea how notoriously repetitive and cliched WIP movies are, within the next decade
more than 50 movies were made with this as the main or primary sub-plot.
Often, this innocent woman is also the only one who knows where the robbery loot is
hidden, a plot element expectation exploited and turned on its head in a very funny
sequence in the Flying H play.
Other near-obligatory scenes in the genre include a riot scene that is put down by fire
hoses tearing off already minimal clothing or revealing yards of transparent wet
shirting covering what would, in the 1950s at least, have been amply supported
cleavage that has inexplicably become bra-less during the riot; and a long group
shower scene usually highlighting a shiv fight. There is almost always a hand-to-hand
grappling fight or two, or three, where the wrestling is explicitly sexualized,
sometimes, in the more hardcore versions, turning into an outright orgy with full on
sex.
In short, a cinema originally meant for the male gaze. However, if men are the target
audience for this cinema, oddly, they are rarely depicted in a very flattering light.
Most males are either outright idiots, creepily evil, demeaningly weak, or slavish
beasts, and all seem to be instantly incapable of rational thought processes in the
mere presence of cleavage. While Flying H’s Women Behind Bars hints at this
tradition, it goes nowhere near the realms of debasement typically depicted in the
films. 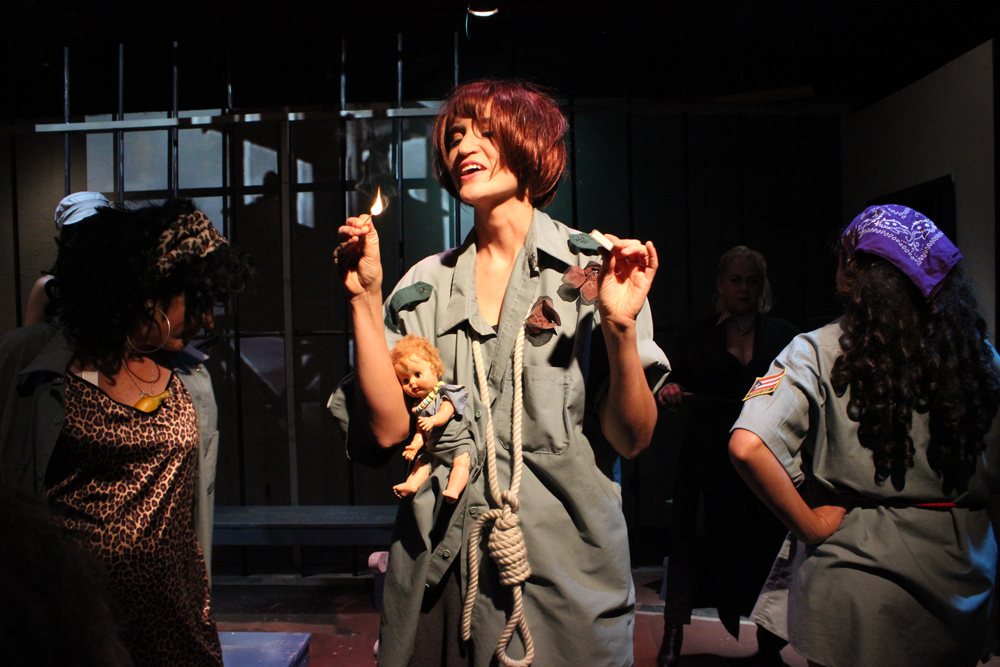 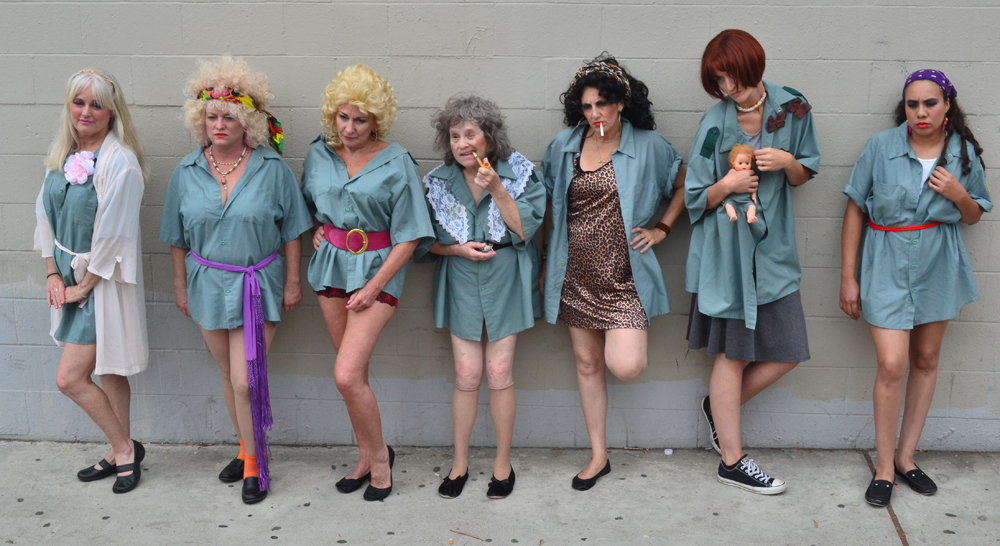