A PODS  exhibition featuring emerging improvisational abstract painters working in Ventura . These exciting up and coming painters each have a distinctive approach and style, demonstrating the rich variety of personal expression available within abstract improvisational painting today.

Improvisational painting--any improvisational approach to any art--involves considerable personal and aesthetic risk. Risk accompanies each stroke, each mark, each decision, each act of the artist. This exhibition celebrates that risk-taking and the people who support it.
This includes the sponsors, two Ventura-based businesses involved with culture and the arts who take risks and support up and coming artists. Risk is so much a part of these businesses that risk-taking is part of their core mission.

Alphonso Acosta was recently a featured artist at Hudio, the new studio/exhibition hall in midtown Ventura. Alphonso brings a new voice to Ventura's art scene. The work featured in this exhibition, "The Old Invisibles" is acrylic on wood and completed earlier this year. Like most of Alphonso's work, it has an interesting history. Alphonso works primarily with discarded and re-purposed commercial paint and discarded wood and other recycled materials, in this case mostly from Habitat for Humanity.  Alphonso uses no paintbrushes or traditional materials and tools.  His materials are often weathered outside, in his backyard. In January 2014 Alphonso burned or destroyed much of is work. Fortunately this piece was saved because his wife "liked it". About a month later it was selected along with three earlier paintings for an independent film, "Two Cranes" (2014), directed by Bart Vandever, featuring veteran actor, Michael Madsen [twocranesfilm.com]. Alphonso currently sells his work via This email address is being protected from spambots. You need JavaScript enabled to view it., veryveniceart.com, and a retail design store in Pasadena. Alphonso has also shown at Hudio Works in mid-town Ventura.

One thing that is intriguing about Alphonso's work is his technique and that this type of thing has been tried by many fine artists before, but these artists are usually unable to fully free themselves of certain visual, technical, academic, and psychological presuppositions and constraints. Alphonso succeeds where others have failed and leaves all traces of the studio behind. Another aspect of this work is the intensity of the pigmentation achieved with commercial paints, which tend to be very weakly pigmented. Alphonso’s process does this in part, as he opens the paints up, lets them sit outside, and puts a bit of water in the can. Thus he essentially lets all the volatile compounds evaporate, which are lighter than water, while the heavier than water resins and pigments are preserved, semi-wet as a viscous residue. This essentially concentrates the pigments in the still usable resin residue. This is what Alphonso pours onto his paintings. There is a certain unity and integrity to Alphonso’s work with how he works and his philosophical orientation that has a singular and personal flavor unique to Alphonso.   image to the left: "The Old Invisible" 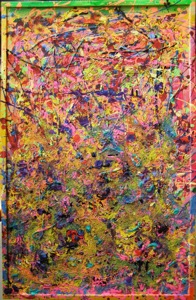 Linda Garcia
Linda Garcia is probably the least experienced of all the artists in this group.  She is still in an exploratory part of her career, but always using relatively abstract and fully improvisational means to achieve her ends. Her strength, I feel, is the freedom and spontaneity she brings to her work and if pursued with sufficient intensity, this energy will find its own personal imagery and voice. The piece selected here, though quite small, reads very well from a distance and has a richness that reveals a whole that is greater than the sum of its parts. This is in line with my interest in abstract visual languages -- visual systems that are constructed from relatively simple, primal, or basic parts - marks and signs that are fundamental human marks-- and thus heavily constrained visual inputs-- and then built up into images of unexpected richness and depth.

Linda has shown on the Ave and at Hudio Works in mid-town Ventura. She had a solo show at the WAV [Working Artists Ventura] earlier this year.  image to the left: "Frustration"

Rima Muna is one of the more experienced artists in this group, bringing international experience and interests to bear upon a highly trained technique. Rima has been a part of Ventura's art education community, teaching at Vita Art Center and our public schools. She has lately shown work at Vita, as well as in places as far flung as Singapore.
Rima brings a form of abstraction based more on biomorphic and geological forms and colors, rather than signs and markings, though some of her work shows a very strong hand and sense of an almost calligraphic line. This is an approach to abstract painting that has a long history and solid standing in international art, particularly in Europe and is currently very present in Asia. In this sense she offers an alternative approach to abstract improvisation, in counterbalance to the work of other improvisational artists working in Ventura such as Alphonso, or the more sign and signification approach of Nash Rightmer or myself. Rima’s work offers a link from an older generation of abstract Ventura painters and printmakers that came before her and their similar biomorphic imagery, to the new generations, not only by her example, but also through her teaching.   image to the left:"wieniawski" 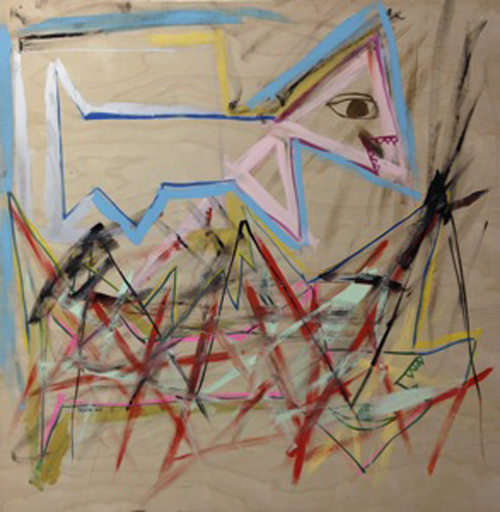 Devin Oatway is probably the most experienced of this group of artists, bringing a Stanford education to bear on a long and varied career, much of it in the Bay Area, to his fullly developed personal style. Devin is a prolific and wonderfully spontaneous painter. He, more than any of the other painters in this show, retains figurative elements in his work with a fully developed and rich personal iconography.  He also has a rather unusual color palette that gives his work a specific range of moods and inflections appropriate to that iconography. Few painters can use light, bright pastel greens and yellow and pinks bouncing off of blacks, oxides, and whites the way Devin does. It is an effective mix. Devin also works a lot on wooden panels, using a tougher, more rigid surface to work against than traditional cotton canvas, which enhances his aggressive brush work. Many works look as if Oatway attacks the surface rather than brushes it, imparting a greater energy and jaggedness to his line, which in turn, creates a more extreme emotional timbre within his forms.

Devin has recently shown at Ojai's Gallery 102, the Bell Arts Factory, and is represented by Elizabeth Gordon in Santa Barbara where he is currently in a group show. Devin is also the Ojai Studio Artists’ featured artist for this year’s Ventura Artwalk 2014.  image to the left: "buried in your yard" 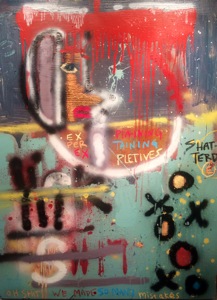 Nash Rightmer brings his own unique approach that is distinct from the others in this show. His abstract improvisational paintings represent only one facet of his work as he also exhibits a completely different body of work built from photo-based imagery and written word. Recently Rightmer has re-introduced words into his paintings to excellent effect. The linguistic play works with the purely pictorial play, sometimes with content similar to that of his more photo-based body of work, providing a philosophical and psychological continuity across all his work. The new word-play definitely adds more depth of meaning and makes some of the paintings more accessible to his sophisticated chromatic and formal improvisation. Rightmer and Oatway also bring considerably more art historical reference into their work than most Ventura artists, which is always a sign of a more mature art scene.
Rightmer exhibited at the WAV [Working Artists Ventura], "Standing in Boots" show [with the curator of this show, Erik ReeL] and the recent artist's book exhibition at the Sylvia White gallery in mid-town Ventura. Rightmer maintains a studio at Hudio Works in mid-town Ventura with work being exhibited during every First Friday Ventura. image to the left:"Shattered"

Both Society805.com and EDGE, in their very mission, support risk taking. Society805.com has, from its inception, covered and written about Ventura's youngest and up-and-coming artists, supported local fashion designers and risk-taking business in Ventura. EDGE  has a mission that is by its very nature risk-taking and rewards risk taking: to connect emerging designers, particularly those that take risks and design with an urban, street-wise consciousness, and the vendors, distributors, and manufacturers that can produce, support, distribute, and sell their designs.

Society805.com
Where LA and the world looks when visiting the 805.

Society805.com online magazine has been a pioneer in online publishing in the 805 and the publishing of arts and cultural information to readers inside and outside the 805. It is where visitors to the 805 look for news on culture and arts in the 805, where  Los Angeles goes to see what is happening in the 805 before they visit.

Society805.com has repeatedly scooped all other publications, both on and offline on arts and cultural stories in the 805. In Ventura, when the WAV project started, before it became a big thing, Society805.com was there interviewing each artist and presenting their stories online. Fashion trends, fashion designers, artists, performers, exhibitions and shows taking risks in the 805 are likely to see their story online at Society805.com first, before anywhere else. When Ventura was designated a national cultural tourist destination, Society805.com covered it first. When trends hit, Society805.com is your fashion and cultural connection in the 805.


EDGE
Connecting emerging fashion designers with the businesses they need to succeed.

EDGE [Emerging Designers Got EDGE, online at EDGExpo.com] is in its research and development phase, looking for viable ways to support fashion design talent and help that talent connect to the resources and venues it needs to grow and flourish. EDGE is primarily focused on business-to-business interaction and infrastructure development, and education, as well as assisting fashion designers directly. The development and growth of the local Ventura Fashion and design industry could have major financial impacts on the local economy, and the fashion designers in it.

During ArtWalk, stay tuned to the VAM Production's POD as there may be other improvisational events appearing at this POD, including performances and world-class music. These events will appear spontaneously throughout the ArtWalk weekend.

VAM productions is part of the ArtWalk VENTURA Weekend

An Interview with Artist Erik ReeL

I enjoyed seeing the VAM art exhibition on Saturday. The whole ARTWALK was a lot of fun, thanks for showing the public/people the great abstract artwork.

0 Cancel Reply
I enjoyed seeing the VAM art exhibition on Saturday. The whole ARTWALK was a lot of fun, thanks for showing the public/people the great abstract artwork.
Cancel Update Comment