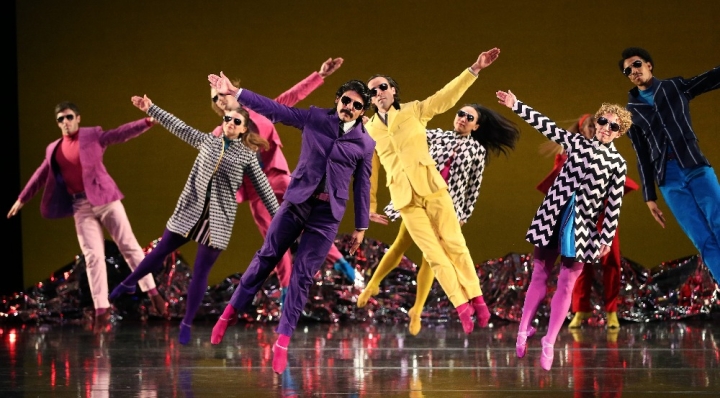 Music and Dance
Sgt. Pepper at 50; Mark Morris at Eternity

Mark Morris, originally from Seattle, emerged at a time when Seattle was a hotbed for new music and emerging choreography. At that point in time, contemporary dance was also emerging from a period dominated by two generations of astoundingly creative choreographers who had tended to emphasis a stripped down visual sensibility, with rampant minimalism, and a narrowing of means in order to generate severe, instantly recognized personal styles.

Historically, the world of dance had needed to do this. Ever since Diaghilev and others had revealed the burdensome Romantic excess of classical Ballet and pushed dance into its more wide open Modern forms, a more thorough re-working had been called for, but never sufficiently executed. Somehow this quintessentially European tradition needed to be blasted open further with inputs from Jazz and a wider, more radically re-worked range after World War II by choreographers working in the New World.

By the time the young Morris arrived on the scene, the more severe trends of Modernism had been worked out and the Balletic tradition completely overcome by newer modern styles. It was also the age of Minimalism in visual art and music as well. There was much discussion in the art world as to the status of Ballet high technique in the future of contemporary dance: some companies such as the Joffrey Ballet, which played frequently in Seattle in Morris's youth, embraced full ballet technique while staging clearly modern works, even working with a contemporary rock group. Most of these companies kept the word "Ballet" in their title. Others, such as Merce Cunningham, came closer to starting over from scratch in order to radically transform their choreographic language. No matter what a company's inclination, Mies van der Rohe's famous Modernist maxim, "less is more" seemed to rule the day. Color was nowhere, it was all blacks, greys, taupe, and white.

Mark Morris would have none of it. For Morris, "more is more". He gleefully steals from everywhere and puts it all into one big pot. Performing and choreographing early on at the legendary Seattle performing arts incubator Washington Hall, Morris revealed a fluid, musical approach exhibiting a high degree of technical ability, yet using any form of dance he could get his hands on, from Ballet to Flamenco to ball room to pedestrian movement. Morris revealed and has continued to develop over his career, a strong sense of visual design throughout all his sets, lighting, costuming, all with a tightly knit bond to music. Eye-popping color and pattern is everywhere.

Morris has always exhibited close and deep ties to a wide swath of music, penetrating into almost every corner of modern and contemporary composing, and in his mature work, into some of its most quirky corners. His tastes in music are as eclectic and all-consuming as his tastes in dance. It is a tribute to his musical insight that he was the first choreographer ever selected as artistic director to the Ojai Music Festival, and his work in Opera over the years is legend. Morris has also been long committed to live musical accompaniment to his dance. 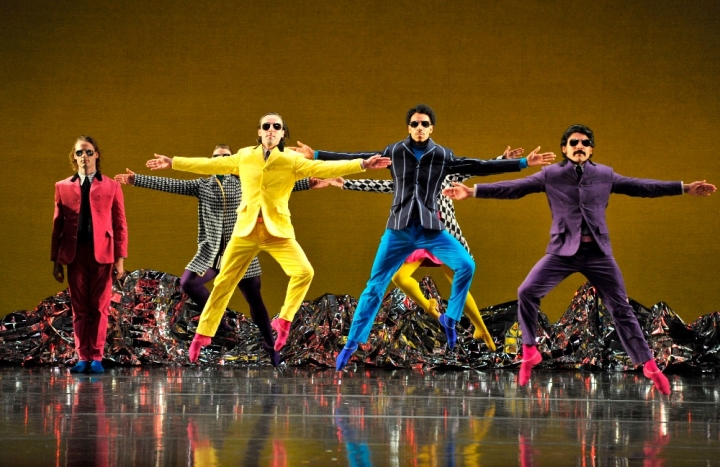 The great wonder of it all, and the magic that is the mark of the Mark Morris genius is that all this abundance of sources and styles and modes never looks like a hodge-podge, over-worked, or chaotic. Quite the opposite, Morris's work has a cleanness of vision to it, a sumptuous flow with an open freewheeling lightness, often appearing effortless in its technical virtuosity. Clear lines and mesmerizing patterns appear everywhere. Morris dancers often look like they are having fun, something that cannot be said for a remarkable number of dance troupes out there. Morris choreography never looks cumbersome or awkward, it is more often than not, light and magical, always visually dazzling, always with a healthy sense of humor.

All this applies to Pepperland, his new major piece given its California Premier at the Granada theatre in Santa Barbara on 10 May. Pepperland, wonderfully, gives us prime examples of much that is great and good about Mark Morris and his musician collaborators, not to mention the Johan Henckens set, Nick Kolin'a lighting, and the fabulous costumes from Elizabeth Kurtzman. It is a flowing ensemble dance without prima donnas.

The work was evidently originally conceived in conjunction with a celebration in Liverpool, UK, of the Beatles' Sgt Peppers album's fiftieth anniversary. A group of artists were selected, each to do a work connected or inspired by work of the Beatles, the famous British rock group. Morris was chosen to do something with Sgt. Peppers. It seems the organizers were thinking the song; Morris assumed he was going to do something with the entire album. Thus a major work was born that was far beyond the scope the Liverpool organizers had envisioned.

It requires substantial resources, read funds, to create a dance work on that scale. Eventually almost a dozen and a half institution would join in to support the effort, which also created the possibility of the work touring worldwide after the festival to the benefit of us all. The final result is a visually stunning, complex work which more often than not deconstructs and enriches the original sources rather than celebrating the Beatles outright, which is to the work's great advantage.

Complementing the classic Morris choreography, Ethan Iverson has given us a score that is quite in line with the Morris sensibility, with references from Stockhausen to jitterbug to New Jazz to South Indian sitar played by an excellent ensemble with Clinton Curtis vocals. A special treat: the live musical ensemble features Jacob Garchik on trombone and a terrifically good theremin player, Rob Schwimmer. Schwimmer's playing on "Within you Without You" and "A Day in the Life" reaches unique heights. Iverson's program notes for "A Day in the Life" simply say: "Theremin nocturne, vocal decant, apotheosis." This is not hyperbole, apotheosis it is.

Balancing Act: Why a Balanced Life is Good for Your Health